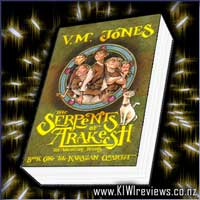 Disclosure StatementFULL DISCLOSURE: A number of units of this product have, at some time, been supplied to KIWIreviews by the company for the purposes of unbiased, independent reviews. No fee was accepted by KIWIreviews or the reviewers themselves - these are genuine, unpaid consumer reviews.
Available:
November 2003

Adam Equinox was abandoned on the doorstep of Highgate Orphanage 12 years ago. He has no idea who - or where - his parents are; no friends; nothing he's good at; and nowhere he really belongs.

One day, reeling from yet another visit to the principal's office, he notices Cameron Haig's unusual bookmark. It's the entry form for the Quest Golden Opportunity Competition, a competition Adam - along with 40,000 other kids - would love to win. Adam doesn't seem to stand a chance. until Cameron gives him his ticket.

Unbelievably, Adam is chosen as one of the finalists. But it's only when he and his four companions begin the gaming workshop that Quentin Quested reveals why they are really there - and launches them on a real- life quest into the parallel world of Karazan, where the Serpents of Arakesh stand guard over the most precious prize of all.

As a long-time Sci-Fi buff, who has now added Fantasy to the list of Literary Loves, I was a little dubious about this book, but figured it had to be worth a try. The story is aimed at readers 10 years old and up, so seemed a bit 'young' for my tastes.

As I read the first chapter, it seemed to spend an inordinate amount of time detailing the minutae of Adam Equinox, the main character. None the less, I was quite rapidly wondering where the story was going, so stuck with it. By half way, I was still wondering, as Adam hadn't made much in the way of movement plot-wise. I was almost ready to put the book down and write it off as a dead loss... when it started to get interesting indeed.

Overall, If you don't mind a story with a huge lead-up, you'll probably really get into this one. By the end of the story I was itching to get stuck into the second book in the series.

Items of note:
- L-o-n-g lead up, rapid and somewhat abrupt ending. Leaves you feeling as though someone has told you a great joke and forgotten the last half of the punchline.
- A LOT of character detail.
- Some really interesting mental puzzles appear in the quest, giving you something to stretch those neurons with.
- If you are at all familiar with RPG's, you'll enjoy the style the story takes after the characters enter Karazan.

Tiny Troll loves his mummy more than anything - even puddles and earwigs. But one bedtime when Mrs Troll is going out, Tiny Troll bursts into tears. He wants to go too!

What will it take to settle him? Patience, cuddles and mudmilk.