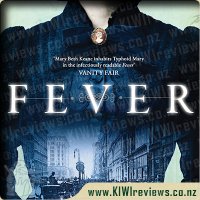 On the eve of the twentieth century, Mary Mallon emigrated from Ireland at age fifteen to make her way in New York City. Brave, headstrong, and dreaming of being a cook, she fought to climb up from the lowest rung of the domestic-service ladder.

Canny and enterprising, she worked her way to the kitchen, and discovered in herself the true talent of a chef. Sought after by New York aristocracy, and with an independence rare for a woman of the time, she seemed to have achieved the life she'd aimed for when she arrived in Castle Garden.

Then one determined "medical engineer" noticed that she left a trail of disease wherever she cooked, and identified her as an "asymptomatic carrier" of Typhoid Fever. With this seemingly preposterous theory, he made Mallon a hunted woman.

Bringing early-twentieth century New York alive - the neighbourhood's, the bars, the park carved out of upper Manhattan, the boat traffic, the mansions and sweatshops and merging skyscrapers, Fever is an ambitious retelling of a forgotten life. In the imagination of Mary Beth Keane, Mary Mallon becomes a fiercely compelling, dramatic, vexing, sympathetic, uncompromising, and unforgettable heroine.

Mary Beth Keane, named one of the 5 under 35 by the National Book Foundation, has written a spectacularly bold and intriguing novel about the woman known as "Typhoid Mary," the first person in America identified as a healthy carrier of Typhoid fever.

Here Comes The Heebie Jeebies and other scary poems
Rating: 9.0

I had never heard of "Typhoid Mary" before reading this book, but was familiar with Irish immigration into New York and other areas in the early 1900's. When I realised that the novel was based on an historical event my mind went into overdrive. There is nothing I love more than historical fiction based on reality.

Overall I enjoyed the writing style, the book moved too fast in places for my liking and I would of preferred to know more of Alfred's story. I liked the technique used of filling in the blanks in a similar way to a flashback and as the novel moves through Mary's life the picture becomes clearer. At times in the novel I found I was at a place that dragged out and I wanted to be somewhere else, but overall it was clear and coherent.

The author makes a fantastic job of imagery in the book especially with the Kirkenbauer baby which brought tears to my eyes. The majority of the time I could see, hear and feel what and where Mary was and a lot of research has gone into the making of the book. The detail of the food was marvellous. It is the detail of the little things that makes this book stand apart from others I have read from similar historical stances.

The hysteria is so real in the book, and the author makes a great job of telling the 'untold' story of a victim of circumstance. Mary Mallon as made out in the book was a head strong women that was decades ahead of society. I love that her and Alfred never married and that for her was acceptable. The interwoven stories of other characters in the book and the ebbs and flows of everyday life make the book hard to put down.

I would recommend this to read by almost anyone as its written in an easy to understand style although at times it could have been more captivating I believe its realistic and sheds light on the way I could image Mary's life to of been like. I would buy another book by this author as she seems to be very up and coming.

While on vacation in Greece, the Thea Sisters make friends with a company of actors rehearsing for a play that is about to open. When an actress sprains her ankle, Colette ends up standing in for her. But suddenly, right before the performance, the lead actor goes missing. Can the mouselets find him in time for the show to go on?