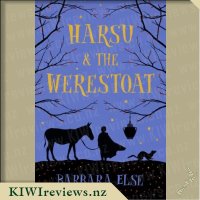 Harsu has five droplets of god blood and a treasured cloak to remember his father by.

Now his father is gone, he lives with his mother, his only friend an old onager donkey. And something is not right with Harsu's mother. She has started kidnapping children, and sometimes her skin grows a soft down, little sharp ears emerge, and she turns into a horrible stoat.

Harsu doesn't know if five godley drops are enough to help him rescue the kidnapped children and turn his own mother to good. And now that he is twelve, he too might be becoming a were-animal...

The Book of God and Physics
Rating: 9.0

When I first read the title I assumed that the werestoat would be something similar in mythos as a werewolf, I was wrong and that wasn't a bad thing. The book follows Harsu who's mother deems him imperfect due to the scars on his face from illness. This leads to her abduction of a couple of babies and when this fails, she takes Harsu, all her things and takes them forward in time. Harsu and his mother, along with the three children she has stolen, end up in a small town in New Zealand. Harsu now faces real problems, he'll never be able to return these kids to their homes but can he save them from his mother, stop his mother from taking another and free himself before she turns him into a werestoat?

None of the characters really clicked with me, though I do like that the stolen children never changed who they were, even though it would have improved their lives, they were still annoying, bratty children at the end (proving that whilst they looked beautiful that didn't mean that they were nice people). The werestoat in question is Harsu's mother, who can choose when to revert to stoat form but also begins to transform when she becomes angered and feels that she isn't being adored enough by the people of the world. Other than the characters stating they are in New Zealand, nothing in the book sets this out as a kiwi book, take away the name and Harsu could have been anywhere in the world...

This book was different to most that I've read, this wasn't a bad thing though it wasn't a book that I will be in a rush to read again. Still, it was nice to read a book that will stand out as something a little bit different.