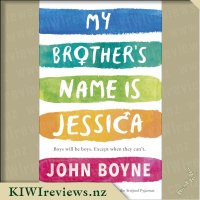 Sam Waver has always idolised his big brother, Jason. Unlike Sam, Jason, seems to have life sorted - he's kind, popular, amazing at football, and girls are falling over themselves to date him.

But then one evening Jason calls his family together to tell them that he's been struggling with a secret for a long time. A secret which quickly threatens to tear them all apart. His parents don't want to know and Sam simply doesn't understand. Because what do you do when your brother says he's not your brother at all? That he thinks he's actually . . . your sister?

Snail and Turtle are Friends
Rating: 8.8

My Brother's Name is Jessica delves into a family that struggles to come to terms with Jason coming out and his transition into his true self, Jessica. The book sets up just how much Sam adores and worships his 'brother' and the relationship that they have before 'Jason' reveals to Sam and their parents that he has always felt that he was in the wrong body and that they are in-fact female at heart. The story focuses on Sam as he begins to be bullied at school and as 'Jason' distances themselves from the family due to a lack of acceptance and his parents loose the plot (mother is trying to climb the political ladder, so both parents fear this could ruin her chances).

I did find Sam to be a bit annoying, more so his overuse of the name 'Jason', though you can understand his attempts to keep the status quo and not have the family go to ruin, as he sees it, it's still a case where the author could have cut out 50% of his Jason's and not made a big difference. 'Jason' only has two supporters during the bulk of the book, his coach who doesn't give a toss because he's a damn good football player and the eccentric aunt who their mother doesn't like. This is aimed at pre-teens, so it doesn't really delve into everything but it tries hard to look at the family and their struggle and at times refusal to accept Jessica, and how Jessica herself is trying to be true to herself but dealing with the loss of her family support at the same time.

The story does manage to give you a happy ending but it didn't really do anything for me. The parents point of view felt like too drastic a change and there is one part where Jessica changes her appearance to pass as Jason in an attempt to save the day and then it gets left, there isn't anything further from that moment and I would have happily done with another chapter or two that showed how things still weren't perfect but you could realistically see how things would improve over time. There were a couple of pages that I skimmed through, which didn't feel necessary to the plot.

This book isn't perfect, with a change of feelings that felt too quick and sudden and an 'everything's perfect and happy families now' ending, the attempt is there. Upon reading the last page, I couldn't give a toss about Sam and his parents, I would have liked this better had it had both Sam and Jessica's points of views. I'm not interested in reading this again and with its rushed happy ending, it's not a book I would quickly recommend to anyone wanting to gain insight into the LGBTQA+ world.