« Rose in the Blitz review 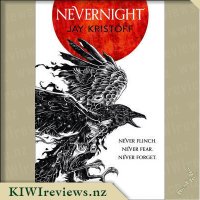 In a land where three suns almost never set, a fledgling killer joins a school of assasins, seeking vengenance against the powers who destroyed her family.

Daughter of an executed traitor, Mia Corvere is barely able to escape her father's failed rebellion with her life. Alone and friendless, she hides in a city built from the boxes of a dead god, hunted by the Senate and her father's former comrades. But her gift for speaking with the shadows leads her to the door of a retired killer, and a future she never imagined.

Now, Mia is apprenticed to the deadliest flock of assassins in the entire Republic - the Red Church. Treachery and trials await her within the Church's halls, and to fail is to die. But if she survives to initiation, Mia will be inducted among the chosen of the Lady of Blessed Murder, and one step closer to the only thing she desires. Revenge.

Build Your Own Stonehenge
Rating: 9.3

I have mixed feelings about this book. I was intrigued by the cover, which promised a mixture of fantasy horror and mythology, so I set an afternoon aside so I could read it in one sitting. It would not be a quick read: since it was over 400 pages long, I estimated that I would need at least four hours to read it from start to finish. To my surprise, it took me more than double that length of time to do it justice despite the fact that I am normally a quick reader. The reason for this slow progress was due to the organisation of the book.

What sets out to be a fantasy yarn is in fact two books: a reference book (presented as footnotes) and an adventure story. Even the story itself is divided into two sections (normal typeset for the main story, and italic for the backstory). I did not mind the italicised flashbacks so much, but the footnotes were intrusive to the point where I kept losing my place and having to go back over what I had just read. In addition to this, the footnotes often included humorous comments which meant they appeared less "formal" and as though there were two authors collaborating, each with a slightly different style.

I would have preferred the footnotes to be combined as a separate reference section at the end of the book: this section could have been a pseudo-historical and sociological background to the main story, with a glossary added for cross-referencing. This would have provided the same information without interrupting the flow of the narrative.

The inspirations that shaped this book are mostly obvious - Rome and Venice are both mirrored, and many of the personal and place names have their origins in Western Europe and the Middle East: Latin, Italian, Spanish, Arabic, and many other languages influence the choice of names: some are as they would appear in the original language whilst others are similar but not identical. The author's intention appears to be to present a kind of parallel universe where things are sufficiently familiar to make the reader feel included while simultaneously ensuring that the a planet with three suns and unlikely fauna such as the sand kraken cannot be the same as our Earth despite the many other similarities.

The other influence that permeates the book is that of Western religion. Many of the concepts and rituals are based on Judaeo-Christian traditions which have been combined into an organisation known as the Red Church. The name "red" is presumably based on its main purpose, which is to nurture and train assassins within a residential training facility. However, there is no resemblance to Hogwarts or any Shaolin temple that I have ever heard of - in fact, it is a cult, despite the reference to "church".

There is a large amount of graphic violence included; although a certain amount is to be expected, given the nature of the book's subject, I would hesitate to recommend it for young adults - my own rating would be R18. Although some of the descriptions are necessary to the plot development, others go beyond what is strictly necessary. (There is also some graphic sex included, but this on its own would not warrant a restricted rating - it is in context and not included to excess.)

The illustrated maps which accompany the book (two at the start and one at the end) are works of art. I spent some time examining each one and found myself wishing that they were larger and more detailed. I would also like to have been given some idea of the scale although I was able to work out some of the distances from the text itself.

I will be interested to see how the remaining two books in the series advance the story. There is more than enough material for a couple of sequels: the concept is original, and the character of Mia is well-defined. Hopefully, by the time the series is complete, the anonymous narrator will have emerged and taken his or her place in the narrative. I admit to having enjoyed the story despite my reservations about the format!

Dan Gookin's For Dummies guides to Word have consistently led the pack, selling more than 1.7 million copies in previous editions. The author's irreverent sense of humor and crystal-clear prose make getting up to speed on Word a snap.

Thoroughly updated to cover Word's new interface, new file format options, and new collaboration and connectivity features. An essential resource for everyone who wants to hit the ground running with ... more...