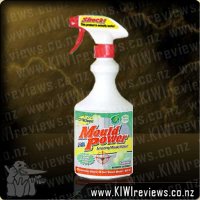 Are you sensitive to toxic bleach, but also sneezy around mould spores? OzKleen, the makers of much-loved Shower Power and Carpet Power, offer the perfect solution to rid rooms of unhealthy moulds, without adding another toxic concoction to the mix. Containing certified organic disinfectant, Mould Power is a new generation, enviro-friendly mould inhibitor.

Unlike other mould cleaners, Mould Power does not contain sodium hypochlorite (chlorine), ammonia or phosphates, so it can be used on most surfaces. Mould Power will kill mould spores and prevent mould from forming, rather than just turning them white as bleach does.

Simply spray the grout areas in your shower once a week with Mould Power to prevent mould from ever appearing again! Mould Power will continue to inhibit germs/mould longer than most other cleaners and has been proven to kill 99.9% of household germs, including staphylococcus, e-coli and pseudomonas.

Mould Power is a great product and I prefer using Mould Power over a bleach based product. It starts working straight away and if used regularly it does keep the mould from returning and doesn't damage the surface it is used on. I am super glad that Mould Power contains a certified organic disinfectant. Mould Power really is a new generation cleaner that is an enviro-friendly mould remover and inhibitor.

You have to love any cleaning product that is organic and friendlier on the environment. Not to mention the many surfaces it can be used on....mould on the ceiling jib, every surface in the bathroom, shower, vanity, bath, it all works a treat and even has a pleasant smell that leaves the area smelling fresh and looking mould free. A quick wipe over with a cloth and the surface is looking brand new!

I like the spray nozzle on the Mould Power bottle, it sends out a mist spray that doesn't drip down the wall, it actually sprays onto the mould and covers it nicely, aiding in the easy removal of the mould. Even when spraying it onto the celing mould the fine mist spray doesn't spray back down onto the face of the person spraying Mould Power upwards, which is great!!

If you have a mould problem try this product, you won't regret it and you won't have mould any more if you continue to use it...and rest easy knowing you are doing a great thing and helping the environment while making your house a safer mould free environment for yourself, your family and your pets.

Suitable for use in hot or cold washes, these revolutionary new Laundry Liquid Pods from Earthwise will dissolve completely, leaving no residue.

So simple, even the kids can now do their own laundry, these pods will deliver a pre-measured portion of laundry liquid, ensuring maximum effect and minimising waste.

Grey water and septic tank safe, with biodegradable surfactants for a gentler choice for you and the environment.