ProdID: 2087 - The Dinosaurs of Waterhouse Hawkins
Written by Barbara Kerley 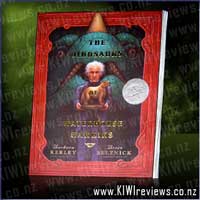 That was true in the mid-nineteenth century, until a Victorian artist named Waterhouse Hawkins brought these ancient animals to life for all to see. Originally in his native England, and later in New York City, he devoted more than three decades to building the first life-size models of dinosaurs, and he dazzled the world with his awe-inspiring creations.

With style, spirit, and impeccable attention to detail, Barbara Kerley unearths a story of consuming passion, triumph, loss, and courage -- and ultimately, of an extraordinary legacy that lives on today. Brian Selznick celebrates this complex and fascinating individual through luminous and soul-stirring paintings that -- apropos of his subject - form a visual masterpiece.

From the youngest dinosaur aficionados to those interested in art, science, or pioneering people, the unforgettable story of Waterhouse Hawkins and his dinosaurs has something to teach all of us about the importance of believing in oneself and following a dream.

I found this book very intriguing. I haven't really learnt much about dinosaurs, but this book has helped me understand a few dinosaurs and how they looked.

I am amazed at how even back in the old days (1853), that mankind was able to establish a connection with dinosaurs, and from a mere couple of bones they were able to reconstruct what a dinosaur would have looked like, without using the hi-tech technology we have today.

I think the book has been designed in a fun way to tell it's story in a child friendly manner, but still using historical facts. I think the illustrations are also portrayed well for being in that era too.

The story shows the complete process used to begin the reconstruction of the dinosaur. From the simple drawing, to the small clay model, then to a life size model, then to a mold. After the mold an iron skeleton is made (to support the tons of cement dinosaur) and finally the finished stage of the dinosaur which is then painted for the last realistic look.

The story starts with Mr. Waterhouse Hawkins in London where he starts his career, then follows him to America where he spends two years creating his masterpieces, until one day he offends a corrupt politician, The "Boss Tweed", and consequently Tweed makes sure there's nothing left usable in Hawkins workshop. With Hawkins' dreams shattered, he then returns back to London, where his work is still on display today.

I have definately found this book an educational read and will be re-reading it again soon.

Journey back in time with Geronimo in this all-new 320-page hardback special edition!

I, Geronimo Stilton, never expected to set paw inside a time machine. But when Professor Paws von Volt invited me to travel with him, I had to accept!

My family came along to help us discover how the dinosaurs became extinct, how the Great Pyramid of Giza was built, and what life was like at King Arthur's court. Along the way I was ... more...