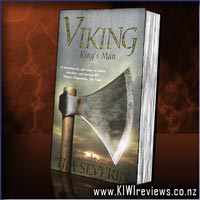 The dazzling sequel to Odinn's Child and Swornbroter - here is the triumphant conclusion to this epic Viking adventure.

Constantinople, 1035: Thorgils has become a member of the Varagian lifeguard and witnesses the glories of the richest city on earth but also the murderous ways of the imperial family. Under the leader of warrior chief Harald Sigurdsson, he is set up as the unwitting bait in a deadly abush to destroy Arab pirates harassing the Byzantine shipping lanes in the Mediterranean, and later joins a campaign to recover Sicily from the Saracens.

When Harald eventually ascends the throne of Norway, Thorgils is despatched on a secret mission to Duke William of Normandy with a plan to coordinate the twin invasions of England - Harald's Norsemen across the North Sea and William's Norsemans attacking across the Channel. On 19 September 1066 Harald's fleet of three hundred ships sail up the Ouse, confident of success, but a prophetic dream warns Thorgils that Duke William has duped his allies and the Norsemen are heading for disaster at Stamford Bridge. Thorgils embarks upon a race against time to reach Harald and warn him before the battle begins, But will Odinn's devout follower really be able to anticipate what fate has decreed and save the heritage of his Viking ancestors?

I was dissappointed with this book due to over half of it being set in the Constantinople/Mediterranian area. I would have liked to have seen more in the Norse area of Europe.

I felt the author rushed the end of this book to get it finished. However that's just my opinion, other readers may see it in a different light.

The author was very descriptive in the Middle East half of the book, and the emperor's court in Constantinople.

King's Man picks up the story of Thorgils from where he was left at the end of Sworn Brother. This time Thorgils is acting as an advisor to Kings. Harald, the king of Norway comes to Constantinople and Thorgils comes into his employ. Thorgils tries his hardest to convince Harald to keep to the old Gods and not succumb to the influence of Christianity.

This novel throws together what little is known of the dark ages and its remaining civilisation. Through fact and fiction this is the tale of Thorgils the wanderer as he becomes a pawn to men of the time.

This story shows the vast variety of living standards, means of warfare and the coming domination of religious power that had evolved since the collapse of civilisation during the Roman era and the dark ages since.

If you're new to Maya, the industry-leading 3D animation and effects software, "Introducing Maya" includes step-by-step tutorials and easy-to-follow explanations to teach you the basics and nuances of this complex software.

Whether you're a student or a hobbyist, you can learn all about the Maya interface and the fundamentals of ... more...