The 39 Clues - The Black Book of Buried Secrets review 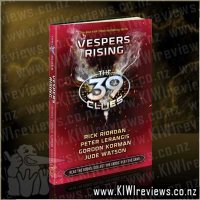 Fourteen-year old Amy Cahill and her younger brother Dan thought they could return to their regular lives after they found the 39 clues that safeguard their family's great power. But they were wrong.

Powerful enemies - the Vespers - have been waiting in the shadows. And they'll stop at nothing to grab the Clues.

Four powerhouse authors unit to expose the 500-year old secret struggle between the Cahills and the Vespers.

The Vespers are rising... and the world is in jeopardy.

The Natural Way to Better Babies

This book is one that will prepare you for the enemy that is approaching, just like "The Black Book of Buried Secrets", only in a different way. It has four chapters, each one written by one of four authors (or agents) who made the original "39 Clues" series. Be prepared, be alert, the Vespers are coming.

The book's cover was great, I love the background colour since it expresses the whole "danger" feeling, and my favourite thing about the cover is the way the smoke forms a "V", as in "V for Vesper". After reading a few pages I thought "This must be a book based on the timeline when the main Cahill founders lived, there's no Amy or Dan", but soon I realised that I was wrong, the years went from 1507 to 1526 to 1942 to the present.

Some parts of the storyline made me a bit confused, but after reading over those parts a few times the confusion went away. The last chapter of the book was my favourite part since it has more action than the other chapters, and it's based in a time that I'm used to reading about.

I liked the cards that came with it. My favourite one is the "Gideon's Ring" card since it increases my curiosity about a certain gold ring that is mentioned in every chapter. The 11th mission on the 39 Clues website (which became unlocked when I added the cards to my online collection) was awesome - my favourite part of the mission was when I had to remove these micro-chips from a suit of armour without touching an energy field around it, it was a bit like playing a game of "Operation", only this time I had a time limit.

"Vespers Rising" is the bomb, so get your copy today and get ready for the next series: "Cahills vs. Vespers". Good luck everyone!

Good evening, and welcome to the middle of the film...

But, the concept is eerily synchronous... You see, this is the middle, or more accurately... a book in between... a bridge book if you will. The 11th book in the award winning 39 Clues series, this book is actually four stories in one, setting the background against which the next series of books will play out.

The five clans of the Cahills have been reunited - albeit tenuously - by the efforts of their children. Now, the clan faces the biggest threat, not only to them, but also the rest of the world, as the Vesper's rise to claim, by force, the now-rediscovered formula for the Master Serum discovered by Gideon Cahill all those years ago. But at the time Gideon developed the serum, his discoveries were being coveted by the Lord who ruled over his land, Lord Vesper... a greedy, brutal and bigoted man who covets anything he thinks will provide him more power... and who destroys anything that resists his desires.

Our heroes, Dan and Amy, come face to face with the Vespers just when they think it's all over and they can return to a 'normal' life... and they discover that unlike the Cahills, the Vesters aren't a family. They are a global organisation that brings in the muscle, brains or brutality it needs to achieve it's goals.

Overall, this is a very novel way to bridge the plots, expanding the view out from just the various Cahill branches and encompassing the rest of the world. Now that our protagonists can finally trust the rest of their extended family, they find they can no longer trust anyone else! Being able to read the short stories means that this book can be easily read in short bursts without losing track of an over-arching plot... great for kids! Very keen to see the new series... the teaser chapter on the website does a great job of grabbing you within the first dozen pages!

Little Bird Blue and Little Bird Black refuse to share. Each wants to sit on the wire alone in this funny rhyming story.