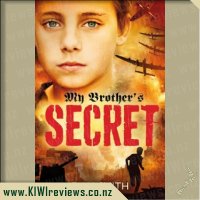 Like all boys his age, Karl Friedman is looking forward to joining the Hitler Youth. But when his father is killed and his older brother tells him things that leave his faith in the Fuhrer shaken, he follows his brother in a dangerous rebellion.

River of Blood - Tales of the Waitoto
Rating: 8.3

I had seen this book and thought about requesting it but then thought that I wouldn't really enjoy it and I'm so glad I didn't request it but borrowed it from a friend.

The story I found was a bit predictable and the secret was so easy to spot that I had guessed it and was just reading to see if I was right. The characters were well enough written, I could never imagine living in that kind of world, where fear is a constant thing and you don't know who you can trust, even families are at war with each other.

Personally I love war stories, I love history and although this is a really tragic time it is also one that is fascinating and has given heaps of material to write about and for people to want to read. I wouldn't read this book again and I found that I would put it down for a few days and not sit thinking "I have to read and see what happens next" and I can normally lose myself in a good book for ages.

I liked that the story was told from a German view point as a lot of the other things I have read or seen was against the Germans and trying to make out that everything was Hitler's fault (it was but that is not the point of the book) so it was good to see a story from the other side of the fence. I personally wouldn't read this book again but it was good to get a break from hard solid facts.

I don't do World War Two books, I just don't, because I find that it is just the same thing over and over and honestly, there is only so many times I want to read a survival story that is so similar each time. But, I thought that I would push myself and give this book a try.

When I first sat down with the book, it was so damn hard to get into, Karl was such a dislike-able character that I really didn't want to keep reading on, but since it was a review book I pushed through. Karl lives with his mother and older brother, finds out that his father has died in Russia, so his maternal grandparents pick up the three of them and move them in with them. So begins Karl's re-education as he goes from praising Hitler and the war to realizing what a dangerous world he now lives in.

The title refers to a secret, and naturally you get halfway through and think you've discovered the secret (though there are many many hints along the way), and then they hit you with another secret (though considering everything going on I wasn't shocked nor surprised by that at all). The characters are good, Karl is believable and once I got to the end of the book I finally liked Karl. There's a little blurb at the end that tells you about the inspiration behind the book.

I found it hard to get into this at the start but I finally managed to get into it and ended up at least liking the book.

This book's title was rather deceiving. Following the exploits of Karl Friedmann, a 12 year old living through the propaganda put in place by the Fuhrer during World War II, one would the story to climax around his brother, or a dark secret regarding him. But the true secret - while hinted occasionally through the book - still hits hard, and comes from left field.

A thoroughly enjoyable book with vivid imagery, full of adventure that escalated at an accelerated rate after a pivotal set of opening chapters. I honestly got two-thirds through the book and wondered how the story was going to end without a cliffhanger leading to a sequel. But it came through - after an event that unfortunately made the ending a little predictable - and it nicely covered off the majority of the plot lines.

This book has strong themes of loyalty, and family, delving the priorities of family versus state. Battling with trust and betrayal, what is considered right and wrong in the eyes of a 12 year old boy is consistently challenged.

Full of action, budding friendships, this war story tells of the struggles that occurred within Nazi Germany; not only from the enemy air raids, but from their own citizens; fighting to save their fathers.

Spiderman. With great power comes great responsibility. Chapter book Based on the story by Stan Lee and Steve Ditko.