« Avatar - The Legend of Aang - The Complete Book 1 Collection review 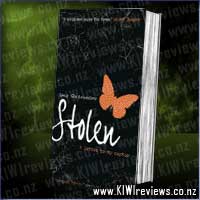 Told in a letter to her captor by 16-year-old Gemma, 'Stolen' explores the influence that a really wild and remote space can have on the inner development of a young woman.

Gemma, a British city-living teenager, is kidnapped while on holiday with her parents. Her kidnapper, Ty, takes her to the wild land of outback Australia. To Gemma's city-eyes, the landscape is harsh and unforgiving and there are no other signs of human life for hundreds of kilometres in every direction. Here, there is no escape. Gemma must learn to deal with her predicament, or die trying to fight it.

Ty, a young man, has other ideas for her. His childhood experience of living in outback Australia has forever changed the way he sees things. But he too has been living in the city; Gemma's city. Unlike Gemma, however, he has had enough. In outback Australia he sees an opportunity for a new kind of life; a life more connected to the earth. He has been watching and learning about Gemma for many years; when he kidnaps her, his plan finally begins to take shape.

But Ty is not a stereotypical kidnapper and, over time, Gemma comes to see Ty in a new light, a light in which he is something more sensitive. The mysteries of Ty, and the mystery of her new life, start to take hold. She begins to feel something for her kidnapper when he wakes screaming in the night. Over the time spent with her captor, Gemma's appreciation of him develops into what is could be referred to as Stockholm syndrome.

This book was a great story, there were parts of it that I wished I could reach into the book and smack Ty as he stole Gemma without a thought to the people in her life that were left behind and who would worry about her and do anything for her safe return. He tells her that he has been watching her for years and that he believes he rescued her.

I couldn't put the book down, I just had to keep reading to see how she escaped and how the story ended. I was hoping that she would get away on her many tries but realistically knew that it would be hard for her to do. I'm glad that he made a deal with her but if he would actually release her we will never know.

The characters were well written and the descriptions were great. I could imagine being there with them but hope I'm never in that situation. I see that there are other books written by Lucky Christopher so I'm going to start reading them as the book was great.

I wasn't too sure if this would be a book that I would like or not but having to take my daughter to hospital I took this with me, turned out to work out well as we had to go back the next day and then ended up overnight so I managed to finish this while we were in there.

The basic premise of this is that a stalker abducts the one he is stalking and takes her to a remote destination where she has no choice but to rely upon him for her survival. I felt that this is a very well written book, so well done that some parts you knew what Gemma was thinking even though it isn't said out loud. Gemma felt very real and so it was easy to go along with the book, sense her confusion and anger etc.

It's a good read about Stockholm Syndrome and I liked that this was an easy read but does it from such a great angle that it is fully believable. It was easy to like Ty at times and then of course you are reminded of what he has done and how long he has been watching Gemma, planning this giving a great balance between liking Ty and feeling a little bit sorry for him to thinking he's a creep and deserves to be locked up.

I rather enjoyed this book but it's not something that I would re-read over and over again.

This book kept me captivated from the first page til the last. This isn't a suitable book if you want a quick read, it took me four days to finish, on and off as i have a demanding toddler. However i'm not as quick at reading as some so it may take others only a few hours to read.

It is a great storyline - a teenage girl, Gemma, is 'stolen', in other words abducted, from a Bangkok airport while on holiday with her family, by a young man called Ty who, it transpires, has been stalking her for years. He imprisons her in a very remote region of the Australian desert. Gemma makes some efforts to run away until it becomes apparent that all attempts at escape are futile.

Gemma hasn't entirely given up hope on escaping, but she is also at this time beginning to see him in a new light which she has never seen in him - sensitive and yet vulnerable at the same time. Through these, she sees a little of him in herself; after all she is very much alone like him as she felt her parents are too busy with their lives to even care about her feelings.

By the end of the book, like Gemma, I started to feel sympathetic towards Ty for what he'd done. Yes it was wrong, and if he'd gone about it a completely different way he could've been with Gemma legally in Australia without anyone being drugged or "stolen".

Ty had told Gemma if she wasn't completely taken with him and the land in four months time he would take her to the nearest town and release her. This however came to an abrupt ending as Gemma was bitten by a venomous snake and ended up in a venom induced coma. He had a choice, to keep her with him and let her die, or take her to the hospital to save her. He chose the latter. By choosing that he knew his time was up and would be charged for his crimes.

Gemma went through so many emotions during this book. Fear anguish, hatred, pain, and eventually fell in love with him, or at least thought she did. I think most readers would argue that what her feelings for Ty might be a cause of Stockholm syndrome; I admit I had the same thinking while reading the story, but the more I read I felt there is also a real connection between Gemma and Ty after all,like it was a very genuine connection to them in the end.

This book has a brilliant ending, i wont give it away - but i can say it was an ending i didn't expect.

During this book there are light hearted moments, like when a camel vomits on Ty's head. Lucy Christopher has done an excellent job in writing this story. She is very descriptive which gives you a good image in your mind of the setting the book is taking place in.

I think with the right actors, this could be a movie that comes away with many oscars!!! The book is definately value for money.

Stolen had an interesting premise and I was interested to read a first person account of Stockholm Syndrome in action. The writing was clear and easy to follow, what I would expect from a book targeted towards young adults. Near the end of the story, I felt myself beginning to feel sorry for the kidnapper much as Gemma does. Yet when I got to the end of the story, I wasn't sure exactly what I thought. I suppose that is the whole point... the confusion of that situation. It isn't the sort of story that leaves you feeling satisfied, but it does raise interesting questions.

I liked the vivid description of Australia, the realism with which Christopher writes her world. If I was told at the end that this was a summary of a true story, I would believe it (it isn't, is it?). In some places, I grew a little annoyed at Gemma for doing such self-destructive things, but I suspect that I was more frustrated with the situation and trying to convince myself that I would have handled it better. Yet how can you really know something like that until you are in her position (and I hope I never am).

Romantic and heart wrenching, this book is an easy read and well worth the few hours it takes to get from beginning to end.

The twelfth in the fantastic Wilde/Chase series sees Nina trying to follow in her late mother's footsteps as she and husband Eddie search for King Midas' legacy. A return to Atlantis - The lost city has defined Nina Wilde's life. Her parents' obsession with Atlantis cost them their lives, but finding it brought Nina to her husband Eddie Chase and a series of archaeological treasures.