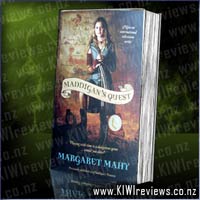 I don't know if the world counts as the world any more, not since the wars of the Destruction...

In a time not far from our own, a colourful group of travellers brave the twisting, tricksy landscape of the Remaking, after Chaos ripped the world apart. They are the magicians, clowns, trapeze artists and musicians of Maddigan's Fantasia, healing the injured land with their gifts of wonder and laughter.

Garland Maddigan, the 12-year-old daughter of Ferdy, the Fantasia's ringmaster, has made the trip before, but this journey offers frightening new challenges. Three mysterious children join the Fantasia and the sinister strangers who follow them become a dangerous enigma as Garland slowly unlocks their secret origin.

I admit, I bought Maddigan's Quest because it had a cool cover. I am really into stories about young heroines at the moment, and on that count, this story certainly delivered. Garland is a plucky young girl who holds her own through the many trials she faces, learning and growing from each experience. The support characters are well defined and it is easy to care for many of them, from young Boomer, Garland's somewhat jealous best friend, to Timon and the blooming adolescent romance between him and Garland. The story was a very easy read, clean and wholesome and only dragging a couple of times in the middle.

I guess I was probably just too old to properly appreciate the way Maddigan's Quest was written. It seemed like a series of episodes which sort-of strung together, but didn't contribute all that much to the final goal except to act as settings for character development and markers along a physical journey from one place to another. Absolutely perfect for the subsequent television series, but somewhat odd in a novel.

My final conclusion, as you can probably see, was somewhat ambivalent. It wasn't a book I would choose to pick up again (though I did subsequently watch the television series - which made some of the plot points a lot clearer). In the end, I am not really sure whether there was something wrong with the story, or whether it simply wasn't my style.

You'll just have to read it and decide for yourself.

Who would have thought that paper models could illustrate some fundamental truths about the universe! Yet Lee Bulbrook has succeeded in using a certain geometrical shape which represents the fundamental structure of real atoms rather well.

Because of this, they glue together logically to make model molecules which closely represent the shapes and properties of real molecules. This combination of words, pictures and models opens the door to a better understanding of this fascinating subject.