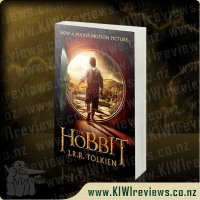 Bilbo Baggins is a hobbit who enjoys a comfortable, unambitious life, rarely travelling further than the pantry of his hobbit-hole in Bag End. But his contentment is disturbed when the wizard, Gandalf, and a company of thirteen dwarves arrive on his doorstep one day to whisk him away on an unexpected journey 'there and back again'. They have a plot to raid the treasure hoard of Smaug the Magnificent, a large and very dangerous dragon...

The prelude to The Lord of the Rings, The Hobbit has sold many millions of copies since its publication in 1937, establishing itself as one of the most beloved and influential books of the twentieth century.

Guardians of Ga'Hoole Collection - Legend of the Guardians
Rating: 9.0

Ghoulish Get-Ups: How to Create Your Own Freaky Costumes
Rating: 8.5

The Bad Guys Episode 3: The Furball Strikes Back
Rating: 10.0

When I was first introduced to Bilbo Baggins and the Shire I was only about 6 years old. I would sit there listening to my mum read it to me and my brother, a chapter or so every night before bed. Naturally The Lord of the Rings followed, but it was Bilbo and the story in the Hobbit that always kept my heart. When I was 10 I borrowed it from the library and read it again, several times, in the four weeks that I had it out for.

Now I am a mum, and I am about to start to read it to my 5 year old son. I know that he will love The Hobbit just as much as I did, and still do. Bilbo is a wonderful, delightful character, He has never left the Shire, never felt the need to and then along comes Gandalf and turns his world upside down. Bilbo was off on an adventure.

The Hobbit was originally written as a bedtime story, and i think it is one of the best books ever written. This is one I will read to my son, then re-read in a year or so to him and his sister, and then again in a few years to the youngest of my three. A timeless book that should be in any book lovers collection.

I believe, from what I can hear, that either my daughter or my wife has just been attacked. I don't know the outcome. The house is silent.

Fourteen years ago two teenage lovers were brutally murdered in a patch of remote woodland. The prime suspect confessed to the crimes and was imprisoned.

Now, one family is still trying to put the memory of the killings behind them. But at their isolated hilltop house . . . the nightmare is about to return.