« Evening Is The Whole Day review

Doctor Who - The Infinite Quest review 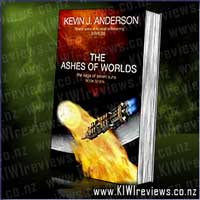 The Saga of Seven Suns : 7 : The Ashes of Worlds product reviews

The allied factions of humanity, along with the waning Ildiran Empire, the powerful water elementals and sentient trees, have defeated the near-invincible alien race of Hydrogues, driving them back into the depths of gas-giant planets. But before peace can heal the wounds between the races, two ancient enemies return: the capricious fire elementals, the Faeros, who mean to burn all those who fought alongside their enemies; and the lost hive race of the Klikiss, who intend to reclaim the worlds they inhabited ten thousand years earlier, worlds that are now home to many human colonies.

meanwhile, the leader of the Terran Hanseatic League, Chairman Basil Wenceslas, intends to pull all of humanities unruly stepchildren into his iron grip - even if it means he has to hold the Ildiran Mage-Imperator hostage, risking renewed war with an entire alien civilisation.

This, the final novel in the 'Saga of the Seven Suns', brings to conclusion the myriad storylines of galactic warfare and personal betrayals, star-lost romances and titanic conflicts.

Create Cards and Calendars using Your Own Digital Photos
Rating: 9.5

By far, the best book I have read in the last 6 months!

In this concluding installment in the Saga of the Seven Suns, Kevin J Anderson has brought all the loose ends together and woven them into a tapestry of galactic importance. In here we discover the fate of Peter and Estarra, once figurehead rulers of Earth's scattered colonies and later fugitives from the wrath of Chairman Wenceslas, we discover how the Wental/Verdani alliance survives the invasive onslaught of the Faeros/Mad Designate Rusa'h merging. We discover how one human finally turns the tide on the Klikiss invasion, and we also discover just how deep Cahirman Wenceslas' madness runs, and how the people of Earth react when they discover how much his manipulations have gone.

By far the most shocking, stunning, enthralling read I have encountered in quite a while, this is indeed the summation of the Saga. With everything in it... love, fear, hate, epiphany, revelation, inspiration and exultation... it has something to please even the pickiest reader.

Overall... an opus of a final story, and if you liked any of his 'Saga' books, you're probably already getting out of your chair and heading for the bookshop!

Convinced Oriana was behind his little sister's kidnapping, Cal teams up with Boges to pull off a plan to extract vital information out of her. Together they plant a listening bug Oriana's house by firing it through her window with an air rifle!

But will spying on his would-be killer reveal the location of the precious Jewel and Riddle, or will it put Cal in the line of fire? With his enemies growing in number as fast as the days are ... more...