The Saga of Seven Suns : 2 : A Forest of Stars review 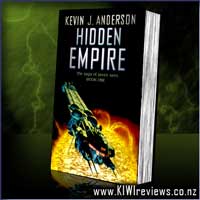 In the far future, humanity began to search the stars, sending out vast spaceships that would take generations to reach their goals. In the depths of space they encountered the Ildiran Empire - apparently the galaxy's only other intelligent civilization    •  The Ildirans came to Earth and passed on the knowledge of their stardrive, allowing humanity to expand to the stars.

Almost two hundred years after that first contact, human colonies proliferate throughout the galaxy. But as Mankind prepares to seize the future, danger comes from the past, as two human archaeologists glean forbidden knowledge from the ruins of a dead world. Once, the insect-like Klikiss ruled the stars. Now, only their robot servants remain, guardians of a terrible technology - the Klikiss Torch, which has the power to create suns.

Humanity prepares to flex its new-found muscle and activate the Torch for the first time in millennia, but there are reasons the Klikiss Empire fell, and a train of events is about to be set in motion that will change the universe forever...

Having, unfortunately, been introduced to the series by reading book 5 first, I felt a bit a contestant of Jeopardy... I knew the answers, but needed to find out the questions... so it was with great interest I grabbed up this book and dived right in, knowing at the very least that I would be able to cope with the technologies mentioned, the alien species that were going to appear, and pretty much that I was going to love it... I wasn't disappointed on those scores.

Where it did become disappointing was having all the suspense deflated down to a series of "Oh, OK, so they are going to do this, then that, kill them, and then betray those ones, before they then go on to..." scenarios... and the more I read, the easier it was to predict the flow of the story... yet strangely enough this actually gave me a chance to relax and enjoy the characters themselves better than if this was my first encounter with the saga. After all, there weren't many plot surprises in store for someone who knew the future of the plot... but the characters were so impressively detailed, it really didn't matter too much!

If this IS your first encounter with this story, you'll be even more impressed and absorbed, because you don't know that in 4 books time, the Worldforest mutates into creatures of pure energy, who fly around granting wishes to all the humans and turning all the bad guys into lime-flavoured lollipops! Well, OK, that's not at all what happens... but YOU don't know that... yet...

As an introduction to the story, written to spread over 7 books (7 suns, 7 books... makes sense huh), this is a great opening gambit. Even if I had known nothing before picking it up, by the time I got through chapter one I would have been just as hooked. Without killing the plot, I can say that as this book starts, there are 2, perhaps 3 if you stretch the definition of 'life', species in the story, but by the end there will be 4 players on the gamefield, and all of them are clearly destined to be pretty big players at that... which means lots of power to reshape the known universe if they work together, and even more power to destroy if they fight... and you know human nature...

Overall, this is a stunning start to the series, and I am well through book 2 already. I am extremely keen to see what book 3 will bring about... after all, there are still a lot of unanswered questions for me... including "How is it that even in a few hundred years, humans are still stupid apes, beating their chests from the trees, when we could be so much more?"

Little Bear can't wait to try out some new experiences, and he certainly can't wait to listen to Mommy Bear's advice. But when he realizes that he's taken on more than he can handle, Mommy Bear is ready to come to the rescue.