I am Not a Worm! review 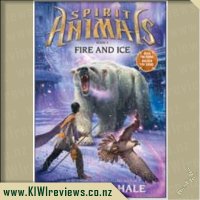 Strange things are happening at the frozen edge of the world. Conor, Abeke, Meilin and Rollan have crisscrossed Erdas in their quest to stop the ruthless Conquerors. Only the four of them, supported by the gifts of their legendary spirit animals, have the power to prevent an evil takeover.

While chasing down a lead in the cold North, the heroes arrive at a quiet village where not everything is as it seems. Rooting the truth out of this deceptively beautiful place won't be easy and the team is already out of time. The Conquerors are right behind them.

Alphasaurs and Other Prehistoric Types
Rating: 9.5

4 books in, and I'm still not discouraged by this series, which is good since I had some traces of scepticism at the start of the series, which could have bloomed into ultimate disapproval had the series gone downhill. It is interesting to read the stories of the four young children learning to bond and draw strength and abilities from their spirit animals, is is quite a ride for me to watch the characters, and the story itself, grow stronger and more complex. One thing that disappoints me slightly is that there appears to be a lot less interconnection between the books than I expected.

I can think of at least 2 book series I've read, or rather, one that I have read and one that I am still reading, where each book ends with an explosive cliffhanger, with the character/s end up in a situation that appears impossible; I have noticed none of that in this series, each book finished as a resolved story, with only a few threads of unresolved mystery left behind in order to prevent you from being able to jump into the series partway and understand everything.

The storyline of this book in particular was still quite grabbing, though, there was still enough action and excitement to keep me reading. I was also able to place myself in a mental mock-up of the scene, although that was not a good thing in the last part of the book, because that part made me feel a wee bit chilly! The way the Great Beast in this book responded to being awoken from a deep slumber was quite a surprise, and at least gave the book a bit on uniqueness and change of pace. To sum things up, I think that this book was good, and I look forward to seeing what story unfolds in the next book, when it arrives. Enjoy!

Both myself and my 12 year old daughter have been thoroughly enjoying this series of books, the mix between coming of age and fantasy of gaining your own spirit animal that will help you save the planet is exciting and a pleasure to read. We have seen some pretty bloody battles between conquerors and the four children and their spirit animals in previous books as they race to gain possession of the great talismans'. In this book they gain one more talisman in a epic battle which brings forth further new enemies to be wary of.

The thing I found with this installment was there was a lot of recapping on previous books with issues like the giving away of a talisman being brought back up and Connor's mum reentering the story. It made the book less exciting to read with less action and adventure, but it was great for character development getting a deeper look at the characters and there stories. We see different relationships forming and getting closer especially those between child and spirit animal.

As each book is written by a different authour we get a different style in each addition to the series and unfortunately this was my least favourite of the four books so far, I just felt less time needed to be spent recapping past events and moving forward into the story such as finding out what allies or foes may be there to help them further in the battles. So far I haven't felt that having the different authors has disconnected the storyline but this time I was a bit disappointed it didn't have the same effect on me as past books.

All in all still loving the series and looking forward to what is coming next, hoping for an action packed next edition to get me more in the mood.

It's estimated that one in almost a hundred people are diagnosed as being on the autistic spectrum but there is far more hope for them today than ever before thanks to groundbreaking new research.

In this fascinating and highly readable book, Temple Grandin offers her own experience as an autistic person alongside remarkable new discoveries about The Autistic Brain, as well as genetic research. She also highlights long-ignored ... more...