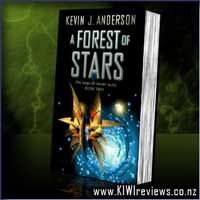 The Saga of Seven Suns : 2 : A Forest of Stars product reviews

Five years after attacking human-colonized worlds of the Spiral Arm, the enigmatic hydrogues maintain absolute control over the galaxy's gas giant planets. Jovian atmospheres are the only source of vitally needed stardrive fuel - and the embargo of whole worlds is strangling human civilization.

On Earth, the corrupt government is exploiting the crisis, tightening an iron grip on rebellious colonies while seeking to dominate the other humans throughout the galaxy. Bracing for the threat from the gas giants, the Terran rulers don't realize the other dangers they face. Earth's alien "friends," the seemingly gentle Ildirans, are secretly abducting and breeding people in enforced sex camps. And the government is using military robots to build cybernetic legions to fight the war, robots that have exterminated their own makers and may turn on mankind.

Five years ago, humans thought they ruled the cosmos. Today they're the galaxy's most endangered species. But when an incredible new race of elemental entities suddenly appear, they destroy all known balances of power. For these beings have suffered genocide for millions of years and are seeking to annihilate all living things.

Now for the humans and the myriad alien factions in the universe, the real war is about to begin...

The second thrilling installment of the tale, and more intrigue and thrills, action and adventure, when not one, but FOUR ancient races are now fronting up on the battlefield, alongside the two younger races, human and Ildirans. The battles are short, but vicious, often beyond the scope of mere humans to comprehend, but always end with the younger races totally, or if lucky, only nearly, devastated.

However, the development of the characters continues unabated, with facets of the young King Peter and the machiavellian Chairman Basil Wencelas being revealed, opening a new battlefront a lot closer to home. With Peter's marriage to a naive but good-souled bride, herself of Royal lineage, a new resolve comes to Peter, and new ways to try and control him come into the hands of Basil. Pure chance saves Peter from an attempted assassination once, but will his luck hold out, even with the aid of the ultimately honest compy OX?

With the discovery of the Klikiss transportal network, and the Hydrogues still violently embargoing any and all attempts at cloudmining for the hydrogen isotope Ekti, which powers the Ildiran FTL stardrive technology, humanity again has opportunity to expand, and escape from the Hydrogues. To further empower humanity's battle against the ancient gas-giant-dwelling race, a lone Klikiss Robot has sacrificed itself in order to allow human scientists to study the underlying technology and build a new class of Soldier Compy, one with a more flexible programming paradigm that allows it greater range of responses during battle. A great boon... but as the saying goes... "If it seems too good to be true, it probably is." Of course we, the readers, know that the Klikiss Robots turned on their creators, destroying them...

Overall, an excellent second installment. Even though I read book 5 first, and thus know where the path is leading, I am still entranced as I read these earlier books, as the path towards what I know to be coming is just as enthralling. It's like going for a drive from Wellington to Auckland... even though you know what awaits you, you can still be stunned by the beauty of the unfolding journey. Can't wait to get stuck into book 3 and see where that goes...

When Grandma McGarvey receives a flyer announcing a 'Surfing for Seniors' course, she's keen to give it a whirl!

But where's the water? And what's with all these computers?