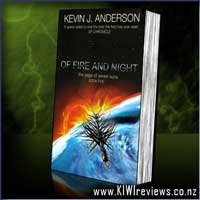 The Saga of Seven Suns : 5 : Of Fire and Night product reviews

After many years of hardship and bravery, the human race faces its greatest challenge. The sweeping war between titanic races - a conflict that has obliterated planets, extinguished entire starts, exterminated whole races - is reaching its end game. Allies become betrayers, strangers become fast friends, and enemies clash in a struggle that will rock the galaxy.

For years, the alien Klikiss robots have pretended to be humanity's friends, but their seeming 'help' has allowed them to plant an insidious Trojan Horse Virus throughout the Earth Defence Forces, and the sudden rebellion of Earth's own compies leaves millions dead and the Terran Hanseatic League defenceless. In a desperate attempt to save his own race, the Ildiran Mage-Imperator Jora'h is forced into a devil's pact with the evil Hydrogues, which will require him to ambush and destroy what remains of the human race. But the gypsy Roamer clans and the Green priests of the towering Worldforest - scattered step-children of humanity - have found innovative ways to fight, as well as strange allies of incomprehensible power.

As the climactic battle is engaged, the Ildiran Solar Navy, the Earth Defence Forces, the Roamers, Green priests, Klikiss robots, and Hydrogue warglobes collide in a fury that will destroy many and change the landscape of the Spiral Arm forever.

I have a list of mind-shaking authors that I am addicted to... and it's not a huge list either, because despite some serious talent out there, it's the one's who consistantly put out 'the good stuff' that really warrant the accolades... authors such as Peter F Hamilton, Iain M Banks and Greg Egan to name a few. I think I am going to have to add Kevin J Anderson to that list now...

I am not normally one to read a book so far into a series as my first taste, but when the stack of review books got really low, I decided to give it a try, figuring that it wouldn't take me long to decide if I should finish it off or not. I was totally hooked by page 20, unable to put it down for the next 4 hours... much to the annoyance of my son who was not-so-subtely reminding me that it was nearing his bedtime and would I PLEASE cook some dinner now?

After a heart-felt apology and some good munchies, he was safe in bed, and I was lost in the book again...

Rarely does a book so far along a storyline grab me the way this one did, and to the degree that I headed right down to my local bookstore and started combing the shelves for books 1-4... much to the interest of the store owner, who had never even heard of this author before... something I find utterly shocking, considering he had 4 titles in this series alone published by that stage. None the less, after much hunting I managed to dig out reasonably tidy copies of books 1 & 4, and now NEED to find books 2 & 3... since I promptly sat down and absorbed book 1, "Hidden Empire" almost by photonic osmosis! It took me less than 6 hours, spread over 3 days, to plow through it, and I don't want to confuse the story in my head by reading #4, then going back to 2 & 3... it's already hard enough trying to deal with what I learned in #5!

Overall, a stunning title, well worth reading... but by now you either already know that, or soon will! Run out, find the whole set, and read them... if you enjoy Space Opera or epic sci-fi novels, you're going to LOVE these!

ps. Anyone got good-condition copies of books 2 & 3 they wanna give me... please?

The second Captain Underpants adventure like you've never seen it before - in full colour!

George and Harold are usually responsible kids Whenever anything bad happens, George and Harold are usually responsible! And it looks like they're up to their old tricks again. First, they ruined the school's science fair with a series of silly pranks. Then, they accidentally created an army of evil, vicious talking toilets, intent on taking over the world. Who will stop the carnivorous commodes? This looks like a job for Captain Underpants!