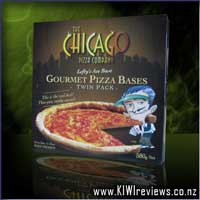 Lefty's the kinda guy that's always got a card up his sleeve. When his cupboard is bare and the crew are around for a game he always grabs a Chicago Gourmet Base and clears out the fridge, making his famous Lefty Leftovers Pizza.

It's become a family legend - it could be yours too.

These bases are obviously made to the same high standard as their premade counterparts, and the sauce provided is just devine. And with a light covering or mozzarella cheese combined with your choice of available and tasty toppings you can make almost any pizza masterpiece you want. Even if it?s a pickle, cheese and salami pizza (and before you ask that is just an example. I most definitely did not make that concoction

I recommend throwing a box or two into the freezer for those times when you just can?t be bothered with cooking a meal, or you have a few leftovers from the previous nights dinner party.

So far, this pizza has been one I can ACTUALLY have. It is vegetarian, well, it is the way I make it.

Being vegetarian, I tend to find my options at pizza houses rather limited and usually, the plain bases one can buy from supermarkets are extremely basic and very often devoid of all taste - even for a plain base. They resemble cardboard both in the freezers and on the plate. Until now, I have tended to make my own bases - such is the standard of the usual basic products. Not any more!

Packed in an attractive box, it is easy to think that this is just a basic tomato pizza, until one reads that it is just pizza bases. And not just one pizza base either - a nice healthy two bases to a pack and both already topped with a delicious tomato sauce and just waiting for you to fire your imagination and the oven and create some gourmet pizzas of your own.

Me? What more could I want than real olives, capers, sun-dried tomatoes, slices of roast aubergine, slices of marinaded artichokes, dressed with a little 20 year-old balsamic vinegar, a slosh of some local extra virgin olive oil and a mass of fresh mozzarella and I will NOT be sharing this one with anyone.

For those who like to create their own pizza, this really is the base for you. It might be too much of a cliche to say 'forget the rest, just buy the best', but this pizza base puts the others in the shade and has re-written the cliche!

I am far from a good pizza assembler, so I took these around to a friend's place and offered them over to his tender care. With his mother having been a catering course tutor for many years, this guy knows how to put together a snack and a half.

After slicing up some precooked cheesy sausages, some meatballs in tangy sauce, some finely grated parmesan cheese and some garlic, herbs and spices, then scattering them in an aesthetically pleasing fashion across the bases, he slid the nearly-finished goodies into an oven in accordance with the instructions.

I was, frankly, worried. After turning the crusts of nearly every frozen pizza I have cooked in an oven into something akin to a lethal weapon, I wasn't too keen to experience the joys of slicing my inner cheeks into ribbons trying to eat something that was rapidly smelling REALLY good...

Thankfully, after the oven went -ding- and the food was returned to the real world for consumption, I discovered to my joy that the crust was crispy, but far from dangerous. In fact, the crust was crunchy, but still quite moist, as my friend astutely commented. We were even able to notice that the base sauce was quite tasty and would compliment a wide range of topping ingredients.

overall, this is a great idea, and any pizza fan should keep a twin-pack of these in the freezer for those impromptu 'drop ins' by friends or family, or just if you have a BBQ and end up with a tonne of leftovers.