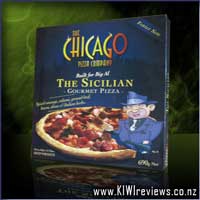 Big Al runs the outfit, (with Mama's guidance of course), and it ain't easy being the boss. Which is why he goes for The Sicilian - the Godfather of frozen pizzas.

It's got a premium base, quality toppings as far as the eye can see, and of course - our famous secret herbed sauce. Big on looks and big on taste. So the next time you gotta reload, whether it's a sit-down with the family - or something to feed the crew - think Big Al's Chicago Grand - the Pizza made by a made guy.

Being the vegetarian of the bunch, I was unable to sample this one myself - However, having a bunch of carnivorous soon-to-be-in-laws really helps, and not surprisingly, they don't object to being the subject of culinary experimentation. Such are the joys of having Pacific Island family around me.

Through the eating sounds, one could gather it was tasty and cooked to perfection. Not just one pizza, but two vanished rather too quickly. That's good because it is obviously THAT tasty.

The product was richly covered in meat, sauce and cheese, with plenty of everything to satisfy all but the pickiest of people - and even then, I am sure they would be tempted to sample it. This is one product that is a must in every freezer to feed any unexpected guests and when one feels too lazy to cook for oneself - just heat and eat and ready in a few short minutes.

Hmmmmmmmm PIZZA---.. Oh sorry had a Homer moment there for a moment. But that sentiment exactly sums up this mouth watering dish, if pizza were art then this would be a masterpiece.

I decided to try this out on a few family members, and the overall consensus about this dish was it was great.

I think this is one pizza I will be buying more of in the future.

Ahhh... PIZZA!!! Definitely one of my favourite types of food! So of course, I was rather eager to give this new range a try, with the Sicilian being first on the list to sample. From the first mouthful, I was well and truely hooked.
Full of flavour, heavy on the topping side of things, and just totally mouthwatering in the taste department - all three combining to create a pizza that will definitely be becoming a regular in my freezer, that's for sure!!

The one and only down side I found with this pizza, was that by cooking it in the oven, the base was too crunchy for my liking, especially since I prefer the softer crusts and bases. So next time, I'll throw it through the microwave and see if that improves the base, turning it into... well... a slice (errr, make that several slices) of heaven!!

Far from being scary, this pizza was a totally stunning taste sensation. Not only was it above and beyond what you would normally expect to find lurking in the frozen foods section of your local supermarket, but it also turned out to be highly filling.

Because of the unfortunate case of overcooking that the Meatlovers suffered, my co-taster suggested we slap it into the nukebox and give that a try. After all, that has the tendancy to turn crusts soft and chewy rather than the oven's tendancy to turn them black and so brittle they snap into pastry razors.

This turned out to be a brilliant suggestion, as the pizza came out so close to perfection that if it had been any better, it would have come with a warning label against chronic addiction! The meat was full of flavour and, for a change from other frozen pizzas, not in the least bit leathery. The sauces were rich and tasty without being overwhelming and drowning out the toppings, and the combination of herbs and spices really rounded it off.

Overall, this is quite possibly one of the nicest pizzas one could expected to find in the frozens section. It even rivals some of the better fresh-made varieties. Well worth sticking a couple of these into your deep-freeze for those impromptu munchie-fests.

Our limes are grown in New Zealand and their squeezed juice (not from concentrate) is blended with butter and egg to make delicious lime curd. It's our twist on the traditional style of lemon curd.