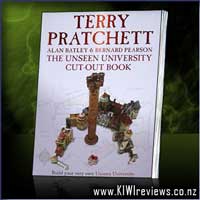 The Unseen University sits in the centre of Discworld's greatest city, Ankh-Morpork. Ancient and magical, it is the home to the greatest library in the multiverse and the oldest building on the Discworld, the soaring Tower of Art. With easy-to-follow instructions, this title is suitable for all from 10 up, including the adult serious model maker.

I have always been a fan of Terry Pratchett's ever since I first happened across a copy of "The Colour of Magic" way back before I care to recall. Ever since then I have built an image of the Discworld in my head.

Recently, after discovering that as well as a book, Thud! is also a boardgame, with not one, but two ways to play. Unable to locate a commercially produced version in NZ, I made my own. Now I can add to my physical icons of the Discworld once again, by transplanting the Unseen University from that world to this one, by proxy at least.

After only a few hours of staring at the pages and wondering how I was going to bring myself to make the first cut... I decided to take the advice of a friend and get the pages colour laser copied and assemble the copies instead! Brilliant... I get to have my cake and eat it too! I decided to get the copies made onto a slightly thicker card... the book pages are about 160gsm which is only double the thickness, and thus stiffness, of standard photocopy paper. I decided to aim for about 220gsm, which is just a bit lighter than business cards.

At this stage, I have only been able to copy and assemble the Tower of Art, which is reasonably simple, but some of the parts (such as The Clocktower or The Great Hall) look as though they will prove challenging to even the most dedicated modelmaker.

Overall, a stunning book that should be on the bookshelves, or craft tables, of any dedicated Disc'ers. The best bit... with the level of reprographic technology available in most copyshops, the die-hard modeller can have months of fun making clones of the University for friends and family. Or, as Terry himself suggests, you should consider buying two copies of the book.

In a land where three suns almost never set, a fledgling killer joins a school of assasins, seeking vengenance against the powers who destroyed her family.

Daughter of an executed traitor, Mia Corvere is barely able to escape her father's failed rebellion with her life. Alone and friendless, she hides in a city built from the boxes of a dead god, hunted by the Senate and her father's former comrades. But her gift for ... more...