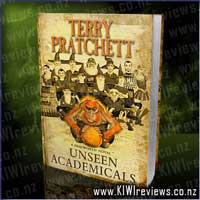 Football has come to the ancient city of Ankh-Morpork - not the old fashioned, grubby pushing and shoving, but the new, fast football with pointy hats for goalposts and balls that go 'gloing' when you drop them. And now, the wizards of Unseen University must win a football match, without using magic, so they're in the mood for trying everything else.

The prospect of the Big Match draws in a street urchin with a wonderful talent for kicking a tin can, a maker of jolly good pies, a dim but beautiful young woman, who might just turn out to be the greatest fashion model there has ever been, and the mysterious Mr Nutt (and no one knows anything much about Mr Nutt, not even Mr Nutt, which worries him, too).

As with pretty much every Pratchett novel I have read, this one contains a lot of plot devices, subtely disguised and tucked away ready to pop up and scream "Hello, this is a PARODY... think about it a minute will ya!" as you blithly wander past in a haze of "What a strange little world this one is, full of maybe-dwarves that do fashionable chainmail, vampires that date tyrant overlords, and dishwashers who become supermodels by accident..."

However, unlike most of TP's tales, I would have to say this one was a little more introspective and darker than the rest, possibly excepting Monstrous Regiment, which, being set in the middle of a war battlefield could be seen as quite a bit thoughtful and dark. Still, reading UA gave me quite a different feeling than the most enjoyable of the Discworld titles. I finished the book feeling somewhat drained. It was still highly enjoyable, don't get me wrong there... but the character of Mr Nutt was somehow leading it all and filling it with Psychology Theory, often in other languages, which just kinda weighed it down too much to remain a 'humourously light read'.

Overall, still quite a good read, and one I plan to revisit again over the winter months when I have more time (and inclination) to sit back wrapped in a warm blanket and ponder life's more subtle eddies and currents in more detail. In all fairness, this really was a gem, with some great moments in it... but the preponderance of 'Big Questions' kinda made it less of a Discworld parody, and more of a Discworld literary version of Film Noir.

Welcome to the Woods! A peaceful home, until...ZAP! ZAAPPP! ZAAAPPPPP!!! It's Monkey in a hovercraft that fires lasers! Science and nature fight again! With robotic worms! Trojan mooses! And lemony doomsday devices! It's the continuing battle between good and evil...It's Bunny vs Monkey: Book Two!