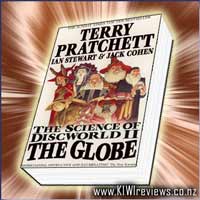 Disclosure StatementFULL DISCLOSURE: A number of units of this product have, at some time, been supplied to KIWIreviews by the company for the purposes of unbiased, independent reviews. No fee was accepted by KIWIreviews or the reviewers themselves - these are genuine, unpaid consumer reviews.
Available:
June 2003

Discworld : The Science of Discworld II - The Globe product reviews

The acclaimed Science of Discworld centred around an original Pratchett story about the Wizards of Discworld. In it they accidentally witnessed the creation and evolution of our universe, a plot which was interleaved with a Cohen & Stewart non-fiction narrative about Big Science.
In The Science of Discworld II our authors join forces again to see just what happens when the wizards meddle with history in a battle against the elves for the future of humanity on Earth. London is replaced by a dozy Neanderthal village. The Renaissance is given a push. The role of fat women in art is developed. And one very famous playwright gets born and writes The Play.
Weaving together a fast-paced Discworld novelette with cutting-edge scientific commentary on the evolution and development of the human mind, culture, language, art, and science, The Globe presents a fascinating and brilliantly original view of the world we live in.
The scene of the final epic battle is the first production of A Midsummer's Night Dream at the Globe Theatre...

OK, this one can be short and sweet really... if you read the first book in the series and enjoyed it, this is more of the same, just moved on a few steps.

Once again Pratchett brings his razor wit into play to give us a story that provides a brillinat garden for the Hard Science to grow in. And just as last time, over half the book is HardSci so expect to have the PC powered up and bee Googling like crazy.

Eccentric billionaire Warren 'Wheelie' Wheelnut has decided to mount the biggest, maddest, most off-the-scale competition ever! He has created five extreme racetracks: from underwater to the desert, outer space, a haunted town and the jungle...it's not chicanes and hairpin turns the drivers need to worry about, but aliens and giant squid! Deep Sea Dash takes the teams on an adventure beneath the waves to face polar bears, giant squid and undersea volcanoes! Which team will defeat sharks, jellyfish and more, to cross the finish line first?