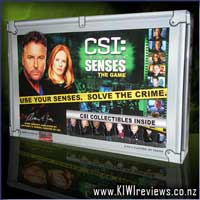 Disclosure StatementFULL DISCLOSURE: A number of units of this product have, at some time, been supplied to KIWIreviews by the company for the purposes of unbiased, independent reviews. No fee was accepted by KIWIreviews or the reviewers themselves - these are genuine, unpaid consumer reviews.
Available:
at selected games retailers

Congratulations! You have been assigned to be a CSI. The first player to successfully complete various "sensory" challenges and solve the crime in Grissom's office wins the game.

I love the CSI program, so I really enjoyed this game! It was a fantastic mix of Cranium and Cluedo, but with the CSI spin on it. In some ways it was a little easier than I thought - I was expecting much more of a brain drain for the around the board questions, but still really interesting. And I got to be Greg! I think the game would have been even better had we read and understood all the rules right from the start, but it was fun nonetheless. I would thoroughly recommend CSI: Senses, it's a fantastic game, although a little pricey for my taste.

Played this at a recent games night and it started quite a cool game, kind of a cross between cluedo and crainium. yet for us the game started to drag out a bit over 3 hours, and as it turned out we missread the rules slightly - not to worry.
Characters are very cool and much fun can be had with the uv torches, (hope your vision comes back soon Wheeled Thing

I have always enjoyed the CSI TV shows, and as with all things, the original is still the best. Grisson brings something... surreal... to it. So it was with great joy I saw that a boardgame had been designed around it.

With some great challenges, even for the younger players, and some fun gameplay, it was certainly an enjoyable 3 hours. It would have been a faster game, had I actually read ALL of the rules properly, because it's a bit of a co-operative/competitive game. The player whose turn it is relies on the other players to guess answers for them, meaning you are in effect asking the enemy for help... but the opponent who makes the right guess SHOULD be rewarded by being allowed to advance 2 spaces... we missed that bit, making the game rather longer than it could have been.

Overall, despite this hiccup, the game was a lot of fun, and will definitely be better to play the next time... which is a hallmark of any good game really. Well worth the play, and anyone in the 14+ age range is going to find something fun in it. Personally, I was really taken with the use of UV torches to reveal answers (because it's hard to catch a sneak peek when the ink is invisible!) and I also had to laugh at some of the little player pieces representing characters from the show. I would suggest for fairness that all the characters are put into the evidence bag and are selected at random, since who you pick can affect the gameplay. After that, it's all go to solve the crime and find the killer... but beware... as some of the players in our game found out, you can OVERthink the evidence and jump to the wrong conclusion.

I have been a fan of CSI since it first came on the telly, so I was really looking forward to playing this game. It is a neatly set out game with spaces for the cards and room (mostly) for all of the figurines to move round the board. The rules of play seemed to be fairly straight forward, but the group I was playing with had some problems when we re-read them and realised we had forgotten some of the smaller rules. This really only affected the speed of the gameplay, not the way the game was being played.

The challenges on the cards were a fair assortment of science based things. The 'bug search' was a little creepy, as there was a spider in the bag and I am arachnophobic. eeewwww... that aside, the other science stuff was neat, if maybe a little involved for young kids.

I felt solving the case was a little difficult, possibly because we had been playing the game a little slower. By the time I had got round the board I had pretty much forgotten the first clue to the crime.

I look forward to playing this game again, trying out another case from the selection, and getting to the end while I can still remember the beginning. A good rainy-day game for the family and well worth the price, whatever that may be.

Players race against the clock, and each other, to form words along designated paths. High scores are achieved by the strategic placement of the uniquely marked vowels.