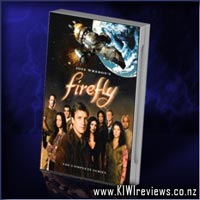 500 years in the future there's a whole new frontier, and a crew of the Firefly-class spaceship Serenity is eager to stake a claim on the action. They'll take any job, legal or illegal, to keep fuel in the tanks and food on the table. But things get a bit more complicated after they take on a passenger wanted by the new totalitarian Alliance regime. Now they find themselves on the run, desperate to steer clear of Alliance ships and the flesh-eating Reavers who live on the fringes of space.

I had never heard of Firefly, but I when I went to buy the movie 'Doom' there was a double pack that included 'Serenity' for the same price. Not one to turn down a great deal, I gave Serenity a watch, and I was amazed at the creativity of this new universe that I had never seen before.

The characters worked together so well, and the universe seemed consistent. It was only after I was telling friends about this great movie, that I was told it was based on the 'Firefly' series. In fact it was ending to the series after the show was prematurely cancelled.

I say prematurely because the show was great, as it had so much potential. With unlimited potential storylines, a great depth to the characters, and an entire universe to explore, Firefly - as a television series - had the opportunity to be bigger than Star Wars. With the feel of a Western story, but set in a space travel-capable age, it provides a great variation of technology.

The characters themselves were well cast, and had you on the edge of your seat wondering how the episode would end. The episodes do generally work well as standalone shows despite following along a larger storyline, and this was advantageous as the series was often screened in the wrong on in different countries. I loved it. If you are unsure, then watch 'Serenity', and you will know if the universe interests you.

I saw the movie, Serenity, before I ever watched the show. It didn't inspire me to go out and watch the TV show, but when we were loaned the first season, we sat down to watch it (as anything my dad recommends, we 99% of the time like as well). Straight away I was into it, it has everything that I like, comedy, action, sci-fi, and so this was a perfect mix of it all.

I found it to be a very nitty gritty show. Literally flying by the seat of their pants, on a ship that was less than perfect, and with a crew very human and very flawed. Yet they all meshed together so seamlessly that when I got to the final episode and remembered that that was all there would ever be I was so disappointed. This show was the real Cowboys in Space.

Prior to this show, my husband and I had already been massive Joss Whedon fans. Although we didn't watch Buffy religiously (we came to the party late on that one), we own all of Angel on DVD. We also really enjoyed his latest series called Dollhouse.

By the time we had our hands on Firefly, we already knew it had been cancelled. Partly I wasn't expecting much, since it was canned so quickly while his other shows got a good amount of seasons. Still, right from the start I knew I was watching something special. Yup its cowboys in space, but there is so much more to it. I loved the dirtiness of the future, the rough and tough reality of 500 years ahead. I loved the way the language was changed. It was a gritty world and the characters all carried a secret.

I was sorry to see the end of this series. I was sorry the film didn't re-boot the series like we all hoped. But what we have in this DVD is gold and I haven't lost my faith in Whedon to deliver more magic in future.

When it first hit the TV screen, I admit I only watched a couple of episodes, and thought it was a bit naff... but like anything worthwhile in life, it sometimes takes a bit of patience and 'just the right mood' to really give it a go... and once I did, I found I actually really liked it. Sure, it's a spaghetti western set in space, with a huge multi-planetary gang of 'bad guys' trying to take over everyone's life... but then, we could say that about today's global political system, just multi-national, instead of multi-planetary.

I really didn't get into the right frame of mind to see this series until after I went to see the big-screen adaptation, named after the ship itself, Serenity. The movie was brilliant, though by necessity slightly different from the storyline presented in the series... you just have to accept that, with the change in format and timeframe. Though the delightful Jewel Staite (playing Kaylee, the ship's mechanic) makes me go all wobbly in the knees, my favourite character would have to be Wash, the pilot... that fella makes flying interplanetary spacecraft in a combat situation look as easy as driving the car down to the corner dairy for milk... what a pilot! When I grow up, in my new clone body, I want to be just like him.

There is everything one could want in a sci-fi series here, from space combat and stunning hand-to-hand fight scenes, right down to the mushy interpersonal dramas between various characters, especially the sexual tension between Kaylee and Dr Simon Tam, and between Inara (the bonded Companion resident on-ship) and Malcolm 'Mal' Reynolds (the captain and lead character), plus of course all the other little dramas that pop up, including an enforced marriage, a train robbery that turns sour, finding a town that worships Jayne (the onboard warrior), plus many more... 4 DVDs worth in fact, comprising all 15 episodes made of series 1... that's a stunning 11+ hours of viewing pleasure.

Overall, despite U.S. audiences giving it a bit of a dud response, causing the studios to withdraw funding and cancelling production of series 2, I actually found it a stunningly good series, full of action and drama in every episode. This series has earned itself an 'M' rating, suitable for audiences 16 years and over, because of the occasional brutal torture scene or graphic gunfight, but don't let that put you off... the graphic violence is tame compared to what we see on CNN or the news shows, so it's still a great view. It's just a darned shame that we are unlikely to ever see a series 2 of it, unless someone has a few spare million to spare? Please? Go on, you know you want to...

Rainbow Springs is truly an attraction like no other in the world. Set in 22 acres of beautiful native trees and streams we are home to a huge variety of New Zealand's most precious inhabitants.

The entire experience is built around New Zealand's largest and most successful kiwi conservation centre. Since 1995 we have released over 1,000 kiwis into the wild.

Added to this intimate view of one of the world's ... more...