Doctor Who: The Ark in Space review 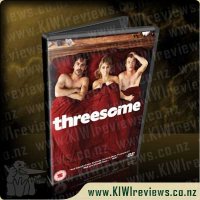 When Alice starts to freak out on the eve of her 30th birthday, she's determined to prove she's not getting boring just because she's getting older. However her 'solution' is going to radically change the lives of Alice, her boyfriend Mitch and their gay best friend Ritchie.

As Alice prepares to take drastic action, Mitch and Ritchie decide they could all raise the child together. Racing to reach Alice before she goes ahead with the termination, little do they realise they're in for another big surprise!

I hadn't had any exposure to this prior to being given it to review. All I knew was the rough plot. It sounded like it could be quite a lot of fun though and I was game. This series has a lot in common with IT Crowd, and The Inbetweeners. Its crude, and has a bit of grittiness to it. But its also incredibly polished comedy. I found myself instantly in love with the characters and the situation they found themselves in.

I will happily admit to burning through all 7 episodes in one evening. And this on a work night of all things! Needless to say, I thoroughly loved the whole thing and will be looking out for series 2 which I understand has definitely been made. Yay. I related so much to a lot of the content of the show. Having been through the whole pregnancy/new mum thing. I understood the feelings of uncertainty, the not feeling ready and the panic of certain situations like coffee groups and ante-natal.

I loved the honesty of the characters. At one point Alice says to a group that the thing she would miss the most was her immaturity. I laughed so hard, because I think its what we would all like to say. I also loved the three-way dynamic. The three of the group are so close, it's lovely. The birth at the end is really unconventional and I loved that about this too. It went to show that just because something isn't the "done thing", doesn't mean it has to be a disaster. It was just nice to finally see that depicted. I really can't wait to see where they take this series next. Thanks so much Roadshow and KIWIreviews for introducing me to this.

The year was 1983 and NOTHING was sacred! Jokes about puberty, dating, Mr. T, disciplinarian mothers, and the personality traits of Michael Jackson were all fair game when the man in the red leather suit took ... more...