« The Following: The Third and Final Season review

Into The Woods review

ProdID: 6902 - Doctor Who: The Underwater Menace
Type of Show: Sci-Fi 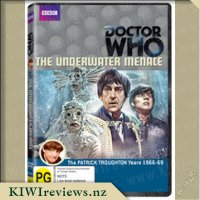 The TARDIS arrives on an extinct volcanic island. Before long, the travellers are captured and taken into the depths of the Earth, where they find a hidden civilisation - the lost city of Atlantis.

The Atlanteans worship a goddess named Amdo and use fish people - men and women operated upon so that they can breathe under the sea - to farm the plankton-based food on which they survive. A deranged scientist, Professor Zaroff, has convinced them that he can raise their city from the sea, but actually he plans to drain the ocean into the Earth's molten core, so that the resultant superheated steam will cause the planet to explode.

The travellers meet up with two shipwreck survivors, Sean and Jacko, who persuade the fish people to rebel and stop work. The Doctor eventually foils Zaroff's plan, but only by breaking down the sea walls and flooding the city.

I am a Whovian, loud and clear, I own a couple of seasons, watched the reboot through multiple times, have the Doctor Who version of Yhatzee and the latest LEGO set, so watching this is a great blast from the past as I don't have much chance to watch some of the original series. Popping this in to play, Miss four heard the theme song and runs out to tell her siblings "Doctor Who is on!!!!" at the top of her lungs and without even needing to see it on the TV.

Sitting down to watch, I needed to explain to my children that the first and last episode would be just still pictures, all the sound would be there but pictures only due to how things were run back when the episodes were created. The audio is wonderfully clear and the photos that they used along side the audio mostly fitted in well, was only a shame that they didn't have more photos to go along with the episodes and I do wish that we could have the full video's but sadly things just don't work out that way. The final episode I feel had pictures that suited the audio better and all the photos were of good quality when you consider how old the product it.

I love the costumes of the fish people, it's blindingly obvious that it is people in costume and makeup but I still think they look pretty darn awesome and I loved the working women's costumes, one that I think in the right fabric/colors could be quite stunning. The plot line is fun and there is a good amount of tension plus the typical puzzle solving that you would expect from the Doctor and his companions (it also reminds me of how much I would like to see our current Doctor with more than one companion, for more than a couple of episodes).

There are a few special features on this DVD, starting with a small piece about this serial, Troughton still being relatively new to the role and some interviews with various people. Following that is a piece set in the building where the original Doctor Who shows were filmed which focused more on Peter Davidson (which makes sense as he's in this little clip) but a bit odd for a Patrick Troughton serial. Then we have the only two clips from episode one and two that are remaining and half a dozen still photos from the episodes.

This was a good serial and it's fun to watch back on some of the episodes that I would have missed out on watching due to the companies policies with old episodes. A fun show and some interesting information, a must watch if you're a Doctor Who fan.

Bates Motel has vacancies and welcomes you for a second season, starring Academy Award nominated actress Vera Farmiga and Freddie Highmore. In the aftermath of Miss Watson's murder, Norman's (Highmore) innocence is buried under blackouts, suspicious characters, and his strange behavior.

Meanwhile, Norma (Farmiga) faces dark truths of her own when family secrets begin to unravel and looming threats from local villains jeopardize Norma's stab at happiness. No matter where you turn - there's no escaping what bubbles beneath the surface in White Pine Bay.