ProdID: 2499 - Billy Connolly - Journey to the Edge of the World
Type of Show: Travel Documentary Series 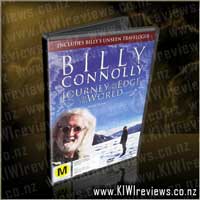 Billy Connolly - Journey to the Edge of the World product reviews

Share a once-in-a-lifetime experience with Billy Connolly as he takes you on an enthralling voyage through the North West Passage, a legendary route deep within the arctic circle that has perilously thwarted explorers for centuries.

In this series, Billy enthusiastically travels this amazing route, stopping along the way to experience people, events and cultures the likes of which you can only imagine, in his own unique and impassioned style.

What is it like to live on the edge of the world? This is your chance to find out.

Billy Connolly - a man in a world of his own!! This film shows Billy travelling the way we would all like to - seeing the world in its greatest and most beautiful detail. Billy is his energetic self, but there is none of the explicit language that generally goes with the stage gigs, but his sense of humour shines through out the entire DVD. Although we only get to meet a small sampling of the people he met, and experience a small sampling of the places he saw, what we do get to see has been beautifully recorded on this DVD - beautiful not only in the scenic sense but in the spiritual sense. What we see in the film truly is Billy at his best, with some simply moving insights into his more private thoughts.

The 2-disc DVD set is absolutely amazing! Let's face it, how many of us can/will afford the time, money and will to undertake a cross-country journey like this? Billy Connolly shows us the great beauty of the Canadian wilderness. The great scenery footage with funky country music lets us experience in great details, Inuit, First Nation and settler cultures such as throat singing, seal hunting, camp sauna, moose hunting, bear tracking, whale sighting etc. He brings us images of bare, cold, rugged landscapes in their most natural and amazing beauty.

Summary: In "Journey to the Edge of the World", Billy Connolly takes the viewer on a fantastic trip around the incredibly beautiful perimeter of Canada, from Nova Scotia up to the Arctic Circle and back down to British Columbia. Billy exhibits an extensive knowledge of the places he visits and a wonderful rapport with the people he meets. Seeing how humans not only survive, but flourish, in such remote regions is fascinating. And you will enjoy watching every minute of it, it is truly a breath taking and simply stunning experience. A definite must have for the DVD collection. Simply amazing and completely beautiful.

How can you put this into mere words?! I don't know... not in a way that will really illustrate the majesty... but I am going to try. Please forgive me if this doesn't do it justice.

In this series, the scenery alone is breathtaking... from high atop glaciers above the line of the arctic circle, through to scenic roadways alongside oceans. Vistas of land, water and ice as seen from the air, fish and whales as seen from the water... and old cultures as seen through new eyes. Throw in a dash of typical Billy wit and some anecdotal narrative and you have magic, on two shiny discs.

Also included is 50 minutes of footage not shown on TV, video diaries and behind-the-scenes footage shot during the journey that never made it past the TV editing bench. (They had to make room for adverts I suppose, more's the pity.) This really does bring a hidden world out into the western world's eyes. If we all could experience this wonderous journey, I am sure our outlook on how wonderful this planet really is would be reaffirmed. Let's take all the polluters and drag them along, show them what they are really destroying. Make them explain their actions to the people being immediately affected by their corporate actions.

Overall, I really can't put my feelings into words. To have shared even this second-hand experience was an experience that blew me away. To walk those steps myself would be miraculous, I believe. I laughed along with Billy, my heart bled when his did, it swelled with pride at how the heart of Scotland beats strong in Canada (of all places!)... and I'm barely even 128th Scotish myself! If you want to watch 3 hours of 'amazing' then this is it. You shouldn't watch it alone, bring the kids... let them see these wonders before they are gone, even if only by televised proxy. It may help them decide to save what's left when they are able.

Orange Is the New Black (often abbreviated to OITNB) is an American comedy-drama series created by Jenji Kohan and first released on Netflix on July 11, 2013. The series, produced by Tilted Productions in association with Lionsgate Television, is based on Piper Kerman's memoir, Orange Is the New Black: My Year in a Women's Prison, about her experiences in prison.

The story of Piper Chapman (Taylor Schilling), a woman in her ... more...