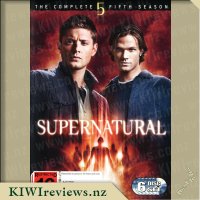 As the Apocalypse grows closer, threatening to turn Earth into a battlefield soaked with human blood, Sam, Dean and Castiel struggle agains daunting odds. New foes arise, including the Four Horsemen of the Apocalypse. Old friends depart, consumed by the fearsome wrath of Hell. Through it all, the Winchesters are targeted by demons and angels alike, who warn that each brother has a special and terrible role to play in the coming devastation.

This harrowing 6-disc, 22-Episode Season Five follows Sam and Dean on their most terrifying journey yet, one that may lead them to the only ally strong enough to defeat the Devil: God.

I've been really enjoying this series and I've been plodding my way through the series, still, it's rather a bit of a shock to see that I've just finished season five! This season starts us off on the slide to the apocalypse and there is so much room here for drama, especially as Sam and Dean try to fight their destinies as the vessels of Lucifer and the angel Michael. For this season, this plot line is the main story and all roads lead to the brothers and their fight to remain free.

As always, though, there's always plenty of other stories throughout, Lucifer and Michael still take center stage but we don't get taken over by it. One of my favorite episodes was based around items that people idolized ie. James Deans 'cursed' car and Paris Hilton (who also acts in this episode). Although "The Real Ghostbusters" had several moments for laughs as the brothers end up at a Supernatural fan convention... I mean they must have had a great time with that episode. These fun moments are of course balanced with some not as fun episodes, we end up fare-welling two characters and having another paralyzed from the waist down.

"Hammer of the Gods" was another good one, it introduced some of the Pagan gods that are in mythologies and I like how they are in the same world as well having to deal with the war between god and lucifer and hunt for the horsemen of the apocalypse, I loved seeing them brought to life. The seasons ends well and leaves you with a huge question and wanting to know where the brothers go from there. Looking forward to season six

The crew of HMAS Hammersley returns to Australia's tropical waters, to face their most dangerous, exciting and gut-wrenching missions yet.

They will risk their lives to save others - friends and foe - from sinking ships, blazing boats and diving accidents. They will be called upon to use every hi-tech weapon and unique skill at their disposal.