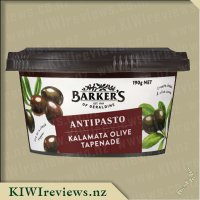 Disclosure StatementFULL DISCLOSURE: A number of units of this product have, at some time, been supplied to KIWIreviews by the company for the purposes of unbiased, independent reviews. No fee was accepted by KIWIreviews or the reviewers themselves - these are genuine, unpaid consumer reviews.
Available:
via online store and selected supermarkets
Samples for Review:

Our Kalamata Olive Tapenade Antipasto is ideal used as a steak topper or baked into cheese scones to create a tasty twist on a morning tea treat. 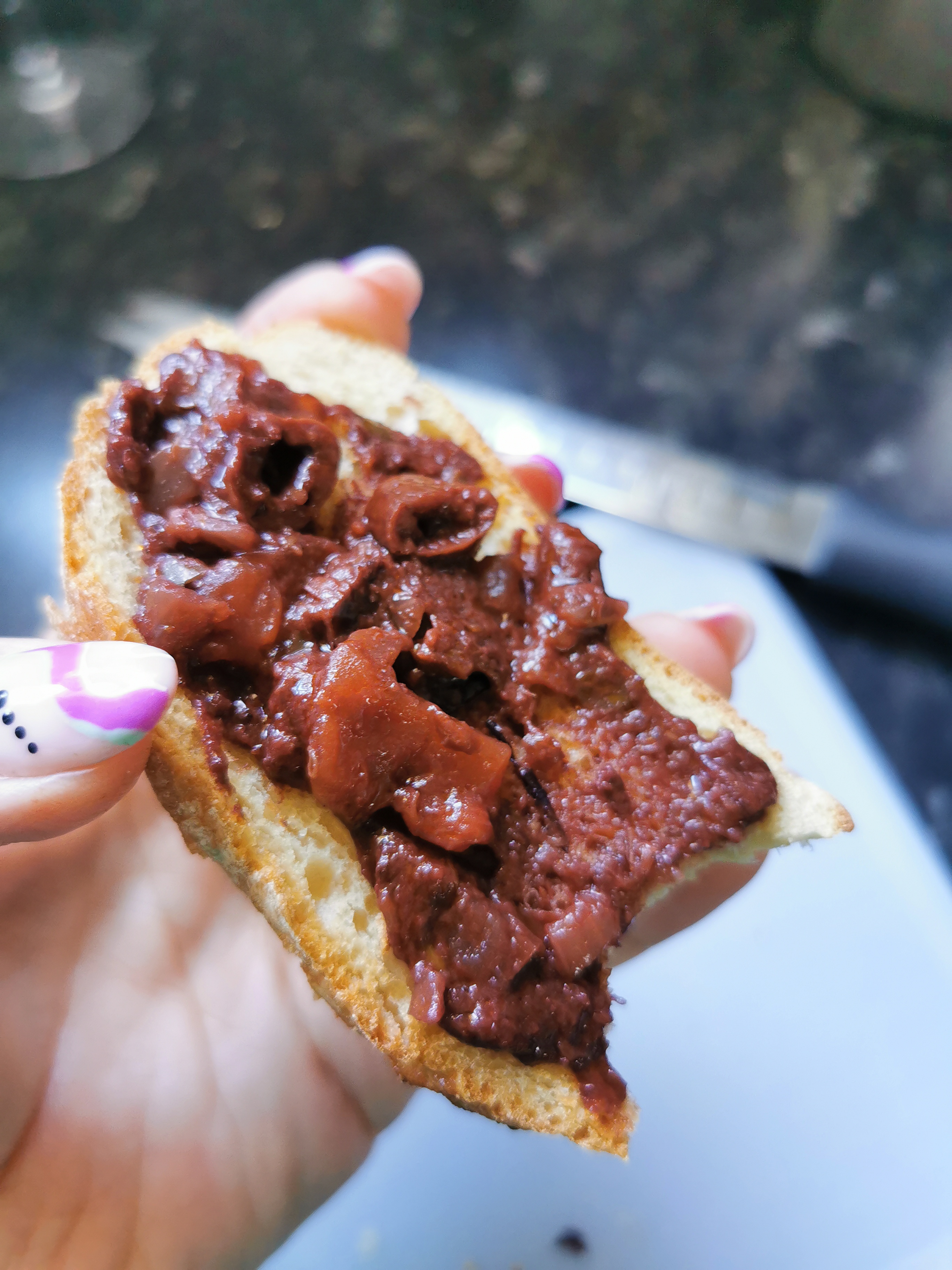 When I saw Barker's antipastos come up for review I was really excited, and requested a few, in the hope I would get to try at least one!!! I was fortunate enough to receive 4 different flavours to try, and, feeling lucky, was spoiled for choice for which to try first.

My hubby opened this one up and immediately you are struck by the beautiful olive colour and smell - it literally transported me back to staying among the olive trees in Greece that hubby and I did on our OE/ honeymoon. Back to the packaging for a second though... it is has lovely art work on it depicting kalamata/black olives and each of the varieties is quite different in appearance, meaning you easily choose the right one when buying it. The container itself has a foil inner seal meaning it can remain in the cupboard until opened and the container has a great tight sealing lid, so I don't have to worry when my lovely kids want to help me by getting it out of the fridge!

Antipasto are very versatile, and can be used in many ways, with your imagination really being the only limit. In saying that, I was pretty boring for the first way of using this - I simply slathered it onto some bread and ate it a la naturale. I was delighted that the antipasto tasted as great as it looked, with nice big chunks of olive in it that you can clearly see. Since that first paste I have used it to eat with cheese, mixed into the meat of lasagne, and as a dip. There are so many more things it could be used for, it is honestly a fantastic thing to have in the fridge ready!

I am very pleased to say hubby requested this to go onto the shopping list once the last bit with finished -so safe to say we ARE buying this again! 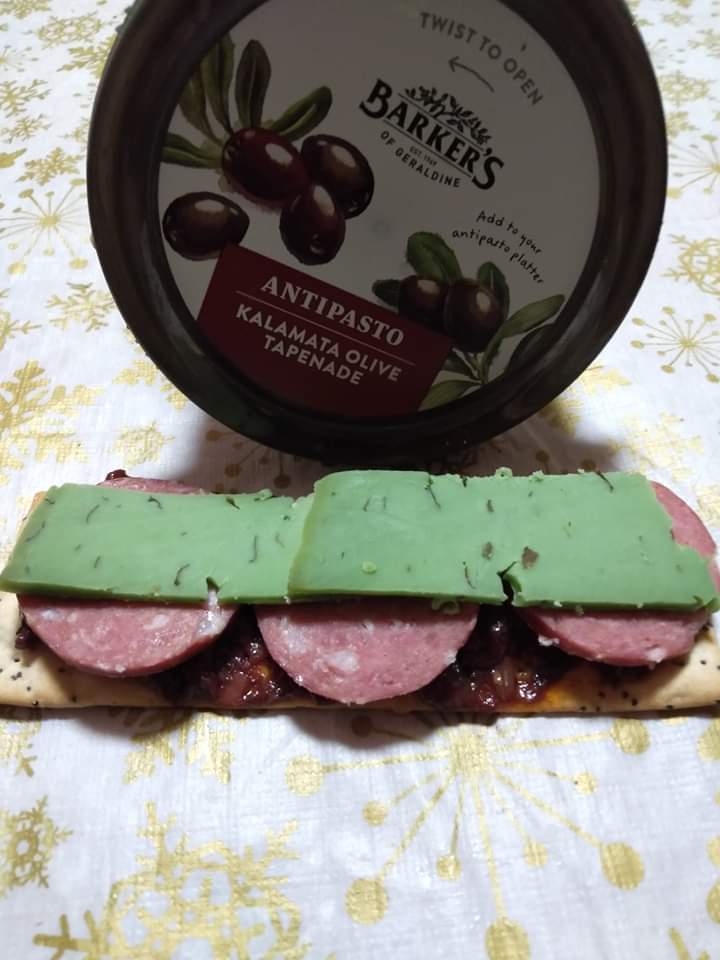 I have started enjoying green olives in the past couple of years but have never gotten into kalamata olives as more often than not they have pips in them, and I am a picky person when it comes to that. But, there is always an opportunity to try something new, so on a lazy, let's have crackers and cheese for dinner, I cracked this out to try. I encouraged my kids to try some and my eldest didn't like it at all, my other two kids thought it was yum but they didn't help themselves to anymore after that first try.

I tried some on a cracker and the flavour was very strong, it was a tad salty but it wasn't too off putting. I made myself a couple more crackers, having a different cheese on each one, feta, smoked, basil pesto and garlic and herb. These were all yummy but were missing a little something, so I quickly made some more, adding salami this time and now it had the right balance. I enjoyed this far more than I had expected and made myself this as a snack several more times, using up the entire lot before I even realized and tried it on something different.

This was far more of a hit for me than I had ever expected and I can guarantee that this will be bought again and thoroughly enjoyed.

When you think of lunch on a hot and sunny day, sitting with a glass of something chilled alongside some olives to nibble on has to be up there with one of the best. Olives just scream Summer to me, providing a salty kick to compliment many other tastes. I was really excited to try this Kalamata Olive Tapenade from Barker's, as it was the first time I had seen an appetizer like this from a mainstream company in New Zealand, and knowing it was from Barker's, I knew that I was in for a real treat.

Tapenade is a kind of dip or spread made from chopped olives, as well as other delicious Mediterranean treats like lemon and capers. When I received the pack, I was excited to see the luxurious-looking deep red-black colour, and I dived right in to give it a taste. The taste was immense- a real power-house of flavour, the olive and salt are perfectly balanced with lemon and vinegar to give a flavour explosion in your mouth. If you like olives, you will definitely love this, and it could be used alone as a dip with crudites or crackers as the texture is thick enough to do this. Perfect for a grazing table or platter, this has a whole heap of uses just by opening the packet, as it is also wonderful spread onto crostini, blinis or bruschetta either on its own or with a slice of cured meat or fish and some pickles or even rocket to add some zing.

Finding uses for the packet has not been hard at all. I have added it into pasta sauces, used it as an alternative to a pickle in sandwiches, and even added it to some cheese scones (as suggested on the pack) which really gave the scones a new dimension (I highly recommend doing this!). I also added it as a marinade or alongside other ingredients as a glaze on both barbecued steak and grilled fish, and what a difference it made. You still have a subtle olive flavour which even my children enjoyed, but the salt and spices really brought out the flavour of these core ingredients- a match made in heaven.

Overall, I couldn't recommend this product more highly. A perfect addition to your staple ingredients, you can never go wrong with an ingredient with as high a quality as this. Delicious, great value and the taste of Summer- you simply have to put this on your next shopping list! 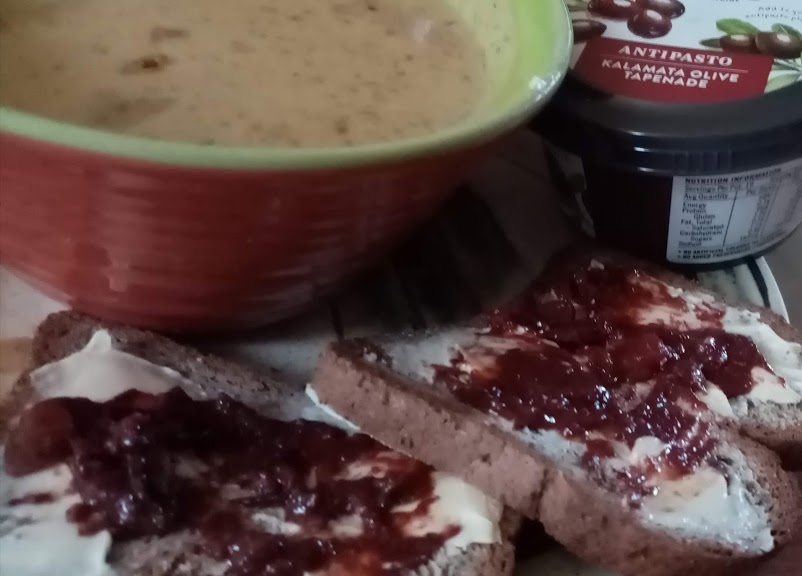 I first came across tapenade - olives mashed with capers - when on a working holiday in Majorca with a French family. We practically lived on them; where kiwis would use vegemite, we would use home-made tapenade to flavour our bread. We ate it on salads, on baked vegetables, and on fish. I now cannot think of tapenade without also thinking back with nostalgia to the Mediterranean cuisine of those times.

I was interested therefore to see that Barker's had produced their own Kalamata Olive Tapenade as part of the Antipasto range. Of course, I was looking forward to finding out how it would stack up against the home-made variety. The taste was as I remembered it, although a little less salty than the Majorca version. However, I do recall that we used to add some anchovies whereas the Barker's version does not include them. But it does include vegetables plus both lemon and vinegar so that modifies the flavour somewhat.

I did like the large chunks of olive which surfaced now and again. Tapenade should not be too smooth - it needs to have a bit of body to it just to add interest. The proportions of lumpy to smooth were just right as far as I am concerned. Having tried tapenades in many ways in the past, I gave this one the ultimate test: thickly spread on grain bread and served with a thick chowder. It was divine.

Once that test had been passed, I tried it in some of the other ways I knew. As a topping for baked potatoes, it is hard to beat. Instead of butter, you add a couple of teaspoons of tapenade and a small blob of cream cheese. There is no need for any other seasoning as the salt and herbs in the tapenade are more than enough to elevate the plain potato to a gourmet treat. I served potatoes prepared in this way to a friend who had arrived unexpectedly, and he found them amazing. He would never have thought of serving olives like that.

At the weekend, we travelled to my cousin's bach where the cuisine is always Mediterranean inspired; she has spent a lot of time in Crete, and one of her favourite dishes is a Greek salad prepared with plenty of tomatoes, garlic, cooked runner beans, and feta cheese. We added some tapenade and stirred it in; she enjoyed it as much as we did. She has always used whole olives in this dish but would never have thought to serve them in this way instead. And the experimenting will continue - but first, I need to get a new pottle of tapenade because the first one is completely gone!

Located in the shopping complex on the corner of College Street and Botanical Road, this 'chippie' is a hidden secret of mammoth proportions. With some unique ways of dealing with the food, this has to be a great place to grab some good munchies.

The staff are friendly, helpful and very skilled in their chosen career, the store is clean and tidy and has a good open feel to it, and from the number of orders that fly out the door and ... more...