ProdID: 7624 - A Cure For Wellness
Directed by Gore Verbinski 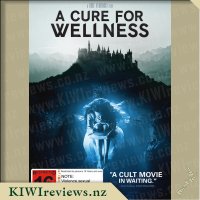 A Cure For Wellness product reviews

I found this film somewhat quirky, but I also found it compulsive viewing. In some ways I thought it was over-ambitious as the director, Gore Verbinski, tried to pack so much into a film slightly over two hours in length, but on another level I really enjoyed the ways it plays with genre, combining the artistic and the crass. The European influence shows through; this is not a strictly British or American movie, but rather an amalgam of the old and the new world, the Germanic and the Anglo-Saxon. I guess what I am saying is, put aside any preconceptions of how a film should be presented and just enjoy it.

The scenic shots are nothing but stunning. The sequence where the viewer follows the car into the dizzying surrounds of the mountains is beautifully done: the grandeur of the landscape and the insignificance of the car in comparison with the vast world around it is all too apparent. I was reminded of some of the routes in Central Otago and the NZ West Coast - notably Skippers Canyon, which I once negotiated in a car whose damaged undercarriage was secured by a length of yellow string, although the film landscape was greener and the road was a lot better!

There are elements of gothic fantasy throughout the movie: a castle on the hill, brooding villagers who hate those from the castle above, peepholes, hidden grilles in the undergrowth leading to who knows what underground dungeons, framing shots with the subject seen through a window or at the end of a tunnel. These effects emphasise the quasi-fairytale aspect of the story which stops just short of a full blown horror movie - although even that changes as the film progresses.

Coupled with this are the voiceovers which offer a sales pitch founded in persuasive language and pseudo-medical "facts', and images of the residents playing various low-key sports like croquet and synchronised aqua exercises such as swimming and ball games. These activities offer a dream-like impression as though the residents have all been brainwashed.

Finally there are the recurrent symbols - the dead goldfish in its bowl (echoing the human swimmers perhaps?), the image of the train playing with the viewer's perception of what is real as it divides into two and then reassembles itself for the final entry into the tunnel, the dripping water, the mother's ballerina models, and the premonitions of death create a dream-like impression which adds to the uneasy feeling that something unpleasant is about to be revealed.

The plot is quite slow-moving; I thought the first part of the film could have been quite a bit shorter. However, it picks up pace in the second half, and the events foreshadowed in the earlier sequences result in a change of outcome. The Wellness Center takes on new significance: it is no longer just a spa designed to restore its clients to full health, but a sinister backdrop for a crime two hundred years old now transported to a 21st century setting.

Despite the complicated plot and the often implausible events, I did enjoy it. It is worth watching if only for the cinematography which is beautifully composed. It is important to watch each scene closely because it is easy to miss vital clues if your attention strays. The soundtrack is impressive, ranging from the classical (Beethoven and Schubert) to the music of the 20th and 21st centuries - echoing the time span of the movie.

Worth watching, too, are the "extras" included in the DVD edition. The meditations are especially fascinating as on their own they come across like commercials for new age retreat centres - all about healthy eating, sensible exercise regimes, and group therapy. Why do I get the impression that they are actually parodying the real world of commercial new age systems? Out of context, they appear as what they are: sly manipulations of the way people lack confidence in their own abilities and try to redeem themselves through accepting a set of superimposed regulations and sanctions.

With even more action, excitement and rescues, Fireman Sam proves he really is the 'Hero Next Door' in this collection of the best episodes from the series. Whether it's stopping a runaway train, saving a boat full of passengers stranded at sea or rescuing Norman Price (again), Sam, Penny, Elvis and Station Officer Steele are ready, ... more...