ProdID: 8154 - The House With a Clock In Its Walls
Directed by Eli Roth 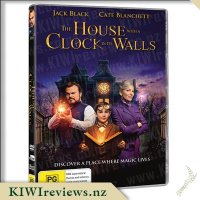 The House With a Clock In Its Walls product reviews

In the tradition of Amblin classics where fantastical events occur in the most unexpected places, Jack Black and two-time Academy Award winner Cate Blanchett star in "The House with the Clock in its Walls"

The magical adventure tells the spine-tingling tale of 10-year-old Lewis (Owen Vaccaro) who goes to live with his uncle in a creaky old house with a mysterious tick-tocking heart. But his new town's sleepy facade jolts to life with a secret world of warlocks and witches when Lewis accidentally awakens the dead.

As soon as we saw the trailers my kids wanted to go and see this, they had enjoyed the Goosebumps film (and TV series) and all were keen to see this, so we went and have since gotten it on DVD. The story centers on Lewis, who newly orphaned, moves to New Zebedee to live with his estranged uncle. He soon learns that all is not as it seems and that magic is very real. Lewis' loss is very recent and I like that the film didn't brush over that, allowing Lewis to be a sad child at times, who cries now and then over the loss.

My favourite aspect of the film was the comradery between Uncle Johnathan and Mrs Zimmerman, the fact that they were good, solid friends who gave a damn about each other, but also the constant jabs and name calling at each other was good fun. We get little hints at their past and I really felt for Mrs Zimmerman (we're given enough to get a base idea of what happened in her past without giving detail, so the kids will get the basic loss but the adults will clue into what caused it). Eli Roth, better known for gore and horror, and you get elements of that in this with the very creepy mechanical dolls that come to life and a character who can shape shift into other people.

The special effects were well done, there is a scene where the universe is shown in the back garden and it looks simply lovely (a little aside is that the Griffin topiary plays with the constellation Leo in this scene). Most of the special effects looked good, though, without giving too much away, Uncle Johnathon ends up with an adult head and baby body and that did NOT look good. I've watched this with my eleven, nine and seven year old, as well as with my mother, and all enjoyed it. This movie deals a little with loss of a loved one, bullying and betrayal, a movie that I found well done and enjoyed FAR more than the book.

Having seen the trailer for this movie but missing out on seeing it at the movies I was rapt to open our review box and see it. With two of my favourite actors in it (Cate Blanchett and Jack Black) I did not wait too long before watching it. As it is PG, and with my three children being 9, 7, and 5, I decided to watch it first, before deciding if it would be suitable for them to watch.

As far as DVDs go - it's pretty standard - and the front of it does give a bit of an idea of what it may contain - ie fantasy, magic, maybe time travel. I have read the book a long time ago - but cannot really remember the story - however I want to now re read it to see how much they stuck to it! The movie is directed by Eli Roth, who is known for gore type horror movies, so I sort of knew what to expect - however this is a PG movie, so I did wonder what he was going to do.

The movie centres around Lewis, a 10 year old boy who is orphaned who goes to live with his Uncle in a weird old house, and pretty soon realises that (to quote well used line) "all is not as it seems" with a weird world, magic and more. I do not want to give away the movie too much, but I definitely think it is not a movie suitable for my younger two and possibly not my older one either, and it really should have been PG13 in my opinion.

The movie itself is okay - albeit a little bit long at nearly two and a half hours. I think it could have cut out probably 30 odd minutes and still be fine. The plot itself loses a little bit towards the middle, but Cate Blanchett and Jack Black are entertaining enough to keep you watching until the end. Jack Black is pretty much as he is in most movies - but I enjoyed it enough to keep watching. About half way through was where it started to go from funny magical to a bit too grown up, with weird dolls and genuinely scary stuff I enjoyed as a horror lover, but from a parent perspective, not so much.

All in all it is not a bad movie, probably not one I will watch again in a hurry, but I did not feel un-entertained, if that is a word!

Sir Michael Parkinson has personally chosen his favourite and most ground breaking interviews for this exclusive to DVD release. Having interviewed some 2000 names over a career that has spanned 40 years, Parky looks back and chooses the interviews that were the most entertaining, eye opening, informative and just his plain favourites. This ... more...