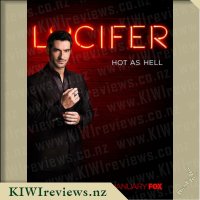 Based on characters created by Neil Gaiman, Sam Kieth and Mike Dringenberg, this series follows Lucifer, the original fallen angel, who has become dissatisfied with his life in hell. After abandoning his throne and retiring to Los Angeles, Lucifer indulges in his favorite things (women, wine and song) - until a murder takes place outside of his upscale nightclub.

For the first time in billions of years, the murder awakens something unfamiliar in Lucifier's soul that is eerily similar to compassion and sympathy. Lucifer is faced with another surprise when he meets an intriguing homicide detective named Chloe, who appears to possess an inherent goodness - unlike the worst of humanity, to which he is accustomed. Suddenly, Lucifer starts to wonder if there is hope for his soul. I'm allergic to cats, and after going to a party and having a cat rub itself against me, I ended up stuck in bed all the next day, chewing on antihistamines, mopping away tears and mucus, as my body struggled to figure out what was going on, so what better time to have a binge marathon of a television series? Well it didn't really work out for the best, to be honest.

'Lucifer' involves the devil abandoning hell and living in Los Angeles (which means "The Angels" in spanish), and after a "friend" gets murdered, invites himself to take part in the investigation. Very much follows similar tropes as 'Bones', 'NCIS', 'CSI', but most notably 'Castle', where we are fed a new murder mystery every week, along with some small movement in the large overarching plot that leads to some development of the main characters.

Earlier I mentioned that the binge marathon didn't really work out, and I feel I should elaborate on this further. As a weekly show I can see it working well. The one story line a week formula works well, as you don't have to worry too much if you miss an episode. One episode has minimal effect on following episodes, and you don't have to worry about remembering everything that happened a week ago; the episodes are very simple, and often act like standalone shows. The downside to this simplistic approach is that it becomes very repetitive; the use of Lucifer's "desire" powers, blunt explanations of more subtle emotional narratives through therapy sessions, the to and fro between Lucifer and his romantic interest. When you watch one episode after another, without a week of other shows as a buffer, you quickly realise how one-dimensional the characters are.

The part of the series that I probably enjoyed the most was the unexplained mysterious "changes" in Lucifer, and the effects of his police partner. The unexpected consequences of his dealings on the mortal plane, was the part that truly kept my interest; the creation and reveal of a "working" artifacts and relics, along with history of theology and christianity within the show.

Casting wise I was interested to see a kiwi actress (based in Auckland) in a recurring role, Lesley-Ann Brandt (who plays the role of Mazikeen). Her parts were minor throughout the season, but towards the climax, we got to see some interesting character developments that I look forward to seeing expanded upon in the following seasons. If I was to imagine the devil in a human form, I would tend to think of someone exotic, so it was interesting to see his portrayal by Welsh actor Tom Ellis. It was hard to really take a character seriously when they have superhuman strength, speed, powers, and are wandering around obeying human laws and solving murder mysteries. He seemed such a contradictory character.

But my favourite cast member would have to Lauren German, who plays Detective Chloe Decker. An absolutely gorgeous woman, who is portraying a woman who used to model and is trying to be taken seriously in her job (which I think is pretty close to what I imagine she is going through as an attractive actress). Apart from the occasional odd expressions, Lauren gives an exemplary performance as she struggles to balance the devil, animosity in the workplace, working with an ex, and motherhood.

Taking everything into account. I enjoyed it, and I'm interested to see where it will go in future seasons, but I will certainly watch it one episode at a time rather than all in one go.

Buddy and his family and friends love heading into the great prehistoric outdoors for fun and adventure! In Explore Outdoors, Buddy and his siblings Tiny, Shiny, and Don, plant sycamore trees with their grandparents and learn how clouds are formed from Mr. Conductor.

They find unique birds to study and sketch on the Dinosaur Train and discover the beauty of stalactites and stalagmites that have formed deep inside a cave. The Pteranodon family is always ready to explore new places and learn new things!