The Voyage of the Sable Keech review 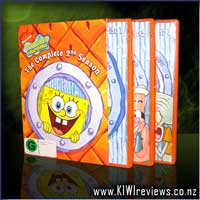 His two best friends and comrades-in-misadventures, are Patrick, a gullible starfish and a temperamental, thrill-seeking squirrel named Sandy Cheeks who lives in an underwater dome complete with a large Texas tree house and picnic area.

SpongeBob is the "best fry cook ever" at the Krusty Krab, where he has to deal with his miserly boss Mr. Krabs and the grumpy cashier Squidward Tentacles. SpongeBob is always landing himself (and his friends!) in hot soup despite the best of intentions. His enthusiasm and optimism are endearing and infectious, making him one of the best-loved characters by children and adults alike.

Contains all of the Episodes from Season 2 on 3 DVD discs.

Lets face it this little yellow guy is insane and so are most of the other main residents of Bikini Bottom. A squirrel who is happy to live in a pressurised dome and only able to visit her friends when encased in an environmental suit. A starfish with an IQ lower than that of his house. He lives under a rock. A crab who makes Scrooge McDuck look like Mother Teresa. An octopus with a love of being so stuck up that he would need permission to blow his huge rubbery nose. These are the people in your neighbourhood, in your neighbourhood, in your neighbourhood. Sorry wrong show. Well lets get back to it. With all of season 2 spread across 3 DVDs you have nearly 8 hours of nonstop underwater craziness. If you love Spongebob you are going to adore this boxed set. Youll probably have season 1 already so what are you waiting for? Go out and get this set too. If you havent got season 1 yet keep an eye out for that as well.

It's bursting at the seams with classic hits such as Sweet Transvestite, Damn It Janet, Science Fiction, and not forgetting the pelvic trusting Time Warp!