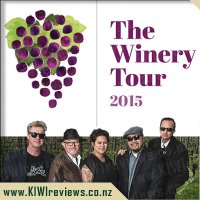 The Winery Tour is about three things that are great about New Zealand: our music, our wine and our scenery. from its beginning in February 2007, The Winery Tour has celebrated this country and its people, it is 100% New Zealand.

The Winery Tour was conceived in summer 2006 when promoters Brent Eccles and Campbell Smith were looking for a venue in Nelson for a Bic Runga national tour stop. On the advice of locals they booked Neudorf Vineyards in Upper Moutere for an outdoor show. It was a huge success. A magical performance by one of New Zealand's greatest songwriters in a stunning location. The following summer the promoters announced the first national Winery Tour. They found wineries and vineyards that had the right "feel", beautiful locations that they thought would complement live music and, of course, produced great wines, and winery owners who understood and were excited by the idea.
About About About

Late January, February and early March is the best time of year to stage an outdoor concert series like the Winery Tour. The weather is generally clear and warm, summer holidays are over, parents are back to work, kids are back at school. Evenings are long, warm and balmy. It's also right before most wineries go to harvest in March.

Since that first Winery Tour in 2007, 128 shows have been played around New Zealand to the end of the 2014 tour. From as far north as Tutukaka to as far south as Invercargill. Over the years some Winery Tour traditions have developed, the very staples that define the event: each year the tour has 3 acts on the bill, the artists are always New Zealanders, gates open at 5pm, first act on at 6pm, last act finishes by 10pm, the seating is all GA, nothing is reserved. Kids under 12 get in free with a paying ticket-holder. Its all about family.

I have wanted to attend the Winery Tour for a number of years but we have never had the funds, this year I managed to win tickets through KIWIreviews so was very excited that we were finally able to go. After sorting out a baby sitter and our transport to the event we just had to wait. Being in Christchurch we were the last concert on the tour.

Canterbury put on a wonderful afternoon for it and the event started with a lovely warm, sunny day. Anika Moa's songs were excellent, the little stories behind them were funny however I found her other banter a little distracting, I honestly think she could do with someone to perform with to allow a more natural conversation to come through.

For us the headlining act was Supergroove. "Can't Get Enough" was the big song the year my husband and I met and was even banned from being played at the camp we met at as it was played far too much. They certainly didn't disappoint and belted out all their hits no problem. After their set was finished they were in the merchandise tent signing autographs and meeting with fans.

The final set was Don McGlashan and Dave Dobbyn. To be honest I went in not really knowing what hits were behind Don but was pleasantly surprised that I knew most of the songs that were played. This set flowed nicely alternating between artists and even bringing back in the other acts from the night finishing up combining with Supergroove for "Slice of Heaven".

Not being alcohol drinkers we didn't visit the alcohol tents but found the other food and drink services really good providing sufficient variety and prices to suit most people. I also have to commend the event staff, from the glass recyclers that wandered through between sets unobtrusively collecting all the bottles, staff at the alcohol counters who didn't hesitate to remove the band of someone they felt was intoxicated, the security staff who later in the evening were walking through the crowds passing out bottles of water to those who needed a change in beverage and the police who were happy to dance with the attendees while still maintaining a professional appearance.

I would certainly look at returning again next year depending on the lineup. The cost for us, especially with the 120km round trip, is a little prohibitive but the event is well run. My only other gripe is the people who came and sat next to us, who towards the end of the evening made everyone around them rather uncomfortable with their actions, so perhaps attending with a larger group who can draw your attention away would be useful.

In my Uni days, living in Palmerston North, there was quite a vibrant Indie music scene, with bands famous, infamous and not-famous all using locations such as Arena Manawatu, the Regent Theatre on Broadway, and the locally infamous "The Stomach" recording studio as venues. Knowing a few 'big names' in the industry as it was back then, I was fortunate enough to attend quite a few musical gatherings, from the Split Enz tour through to the Tadpole "Buddhafinger" tour, Les Mis through to Cabaret. But my best "musical event" memories have to be of the short-lived "Mountain Rock" festival which paved the way for events like Big Day Out and Parachute.

This tour reminded me of a smaller, less chaotic version of those heady days - open lawn, big-name musos on stage being 'normal people' who just happen to be performing, drinks and food scattered around, families... and the odd idiot who was just determined to be as drunk and annoying as possible. Thankfully, the worst of them were discretely ushered away to sober up out of the way of the great majority of responsible people who just wanted to enjoy the music, have some fun and maybe dance a bit. And that's what makes events like this great.

Since I was there 'on duty' and would be driving myself home, I didn't partake of any of the fine wines and other beverages available, however there was a great selection and the prices were fairly reasonable for such an event. The food was much the same - quality food ranging from snacks to meals, all at fair prices for events such as this.

The show started off with Anika Moa who sang a medley of her hits, and also bantered with the audience a fair bit. It was great to see her breaking the fourth barrier and interacting directly with the audience, including an impromptu dancing contest with some of her CDs up for grabs as prizes. This was very popular and had 20-30 dancers all vying for a free autographed CD. Supergroove then took the stage and rocked everyone HARD while the sun set over the hills. They were so good at getting the audience hyped up, well over half the attendees were on their feet at the foot of the stage dancing hard-out. SO hard, in fact, that even the ground where I was sitting - a good 50m from the stage - was bouncing in time to the dancers. It made getting stable photos an 'interesting' task to say the least!

A dinner break ensued after the SG lads finished their set and took to the merchandise tent for a round of free autographs, then Dave Dobbyn and Don MacGlashan took the stage and finished the night off. I hadn't realised exactly what a wide influence these two men have had on Kiwi music over the years - so many hits I grew up with, but never knew these lads had a finger in. Of course, Dave is well known for many of his hits, but Don is, I am ashamed to say, a bit of a mystery to me. At least, he was until I heard the songs and had a "Whoa!" moment, or ten.

Overall, there wasn't a song sung that at least 50 people weren't singing along to, which is a great sign for any live musical performance event. In fact, I would have to say that this is one of the best 'small concert' events I have been to in the last decade... and it's one I certainly hope to attend again in future years, line-up depending.

I was lucky enough to win two tickets for the Mills Reef Tauranga Winery Tour event. With two young children we don't get out in the evening much so fair to say I was a little excited about this. Me and my partner found a babysitter so we could have a afternoon/evening out all to ourselves and it is fair to say we really enjoyed ourselves.

We took along a picnic dinner and a blanket and outdoor chairs for the event which was great as we could set ourselves up for the evening in full view of the main stage and have an element of comfort with our blankets. There was certainly enough room that it didn't feel crowded or that you didn't have your own space. We had quite a nice spot from arriving early and I had a good view of everything which was great.

Being on a tight budget I did find the wine and beer out of our price range at $6 for a glass of beer and $9 for a glass of wine so we did not get any alcohol. Which was fine because we were driving anyway and we didn't feel like we needed the wine to make it an enjoyable evening. The atmosphere was great everyone seemed really buzzing and you could hear people singing along to the music. Admittedly I did find myself humming along to the likes of Loyal and Bathe in the River.

All the performers were amazing and the music itself was great. I really loved Anika Moa she has a great sense of humour and had me in stitches with her talking. I think she would also make a great comedian. The night was just very relaxed and a perfect night out for me and my partner.

Recreating their stories of burning ambition, extravagant dreams, passion and rivalry as great minds clashed, this programme delves into the history of seven epic monuments spanning the industrial revolution.

Using spectacular CGI, the seven stories that are revealed here are: the SS Great Eastern; the London sewer system; the Bell Rock Lighthouse; the US Transcontinental Railway; the Panama Canal; the Hoover Dam; and the Brooklyn Bridge.