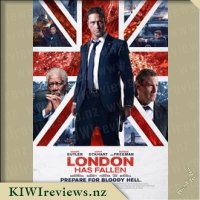 Disclosure StatementFULL DISCLOSURE: A number of units of this product have, at some time, been supplied to KIWIreviews by the company for the purposes of unbiased, independent reviews. No fee was accepted by KIWIreviews or the reviewers themselves - these are genuine, unpaid consumer reviews.
Available:
22 June 2016

After the death of the British prime minister, the world's most powerful leaders gather in London to pay their respects. Without warning, terrorists unleash a devastating attack that leaves the city in chaos and ruins.

Secret Service agent Mike Banning (Gerard Butler) springs into action to bring U.S. President Benjamin Asher (Aaron Eckhart) to safety. When Asher falls into the hands of the sinister organization, it's up to Banning to save his commander in chief from a horrible fate.

It always makes me laugh when I see the lead actor is also one of the Producers of the movie. You know straight away that this character is going to be an absolute 'Hero' where no one is going to be able to touch him and always has camera time - this is indeed that type of movie. Gerard Butler's character was beyond arrogant and the way he can handle a gun and save the day was beyond over the top. The cheesy lines he said made me cringe and although this is entirely plausible it just felt too try-hard for my liking.

My husband loved it. Where as I 'just' tolerated it. It started off really good, Britain's Prime Minister dies so all the world leaders gather for his funeral but it's a farce and instead it ends up a slaughter house. Only the American President survives and Gerard Butler manages to take down the army single handedly. It is scary as the way the world seems to be going at the moment it is indeed plausible that something along the lines of this could happen one day but to the grand scale that this was executed I think we are safe for some time yet.

Maybe its because Gerard Butler will always be the 'Phantom of the Opera' to me, but I had a hard job believing that he was this lethal action hero. The scene where he is about to go in and rescue the President and SAS guy says 'There's more than 100 terrorists in there' and Butler turns around and says 'Yeah? Well they should of brought more men' my husband was cheering while I was groaning - it was so bad and so unnecessary but then there were quite a few scenes equally uncalled for.

The CGI in this had its moments and the helicopter scene was just terrible, especially when one pilot says to the other "you need to sacrifice yourself" and he just says 'roger' and lets his helicopter blow up to save the President. I am sorry but on what planet would this happen? I am sure in the job description it says something along that line but to do it I am not so sure. Not only did the script needed some tweaking but someone forgot to add some wind to the scene and instead everything seemed to stay motionless - including the flags.

The whole movie reeked of 'The Middle East' are the bad guys and 'Americans' are the only ones that can save the world, purely with their brawn alone. Not even the SAS guys stand a chance against the bad guys - only the one lone American is required to save the world. The scary thing is this sort of movie fuels the fires of hate and I am sure that there are a lot of people who would believe the messages this movie was trying to portray.

It is not a bad movie, do not get me wrong, it's just he is no Bruce Willis or Arnold Schwarzenegger and it is extremely over the top. I don't think the casting was fantastic and the execution definitely needed some work. definitely a no-brainer of a movie and if you love movies where the bad guys die from just one bullet but the good guys can have over a hundred bullet wounds then this is the movie for you. Maybe I am just growing up but in a nut shell it did not do much for me.