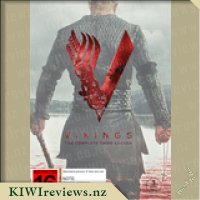 Prepare to raid and wage battle once again, in an ancient kingdom dominated by vengenance, lust and thrilling conquest, in Season 3 of Vikings.

The gripping family saga of Ragnar, Rollo, Lagertha and Bjorn continues as loyalties are questioned and bonds of blood are tested. Now king of his people, Ragner remains a restless wanderer, leading his band of Norse warriors on epic adventures from the shores of Essx to the mythical city of Paris.

But stunning betrayals and hidden dangers will test Ragnar's courage and strength like never before.

True to form there is blood, fighting, at times really bad CGI, revenge, death, city rioting, talks of god both Christian and Norse Gods and a lot of back stabbing. The only difference between this series and the past two is how slow it was and how talk heavy it seemed. It did not have that same fast pace that I have become used to and instead was extremely boring in areas. Where as we finished the first two series in three to four days this took well over a week as I could not get it to it and instead needed breaks inbetween DVD's.

My husband did enjoy it and can not wait for the forth season where as I spent most of this season holding out for the last episode as it is always the big game changer. However, with this one I was gobsmacked, in shock, then confused and left not fully understanding what the end game was really about. It was not the ending I was expecting and was left a little shattered by the whole thing. My husband then went on to explain that it is all folk law and told me what would probably happen in events to come. Ragnar has become a legend like Robin Hood and the line is extremely blurry between what is fact and fiction.

There were a lot of deaths in this series and some where totally unexpected and in my views unnecessary. Instead of conquring Essex Ragnar decides to set his sights on Paris and all does not go to plan. A lot of betrayal occurs in this season, which is to be expected but in the end it feels like you can not really trust anyone at the end of the day as everyone is willing to stab you in the back in a wink of an eye.

Religion was huge this season. Exploring Christianinty turning there back on the Norse Gods beleiving that everything is done for gods purpose and nobody can touch you if you have total faith. I did like the man preclaiming that Christianity was the only true god and so to prove his faith he held hot steal only to have his hands burnt to a crisp, which ended up costing him his life. Floki became a little obsessive and twisted in this season and I really ended up resenting him and his beliefs. All in all it was not light hearted and fun as the previous two.

Where as it is still a series I am wanting to see and find out how it all turns out for these Vikings on a mission I don't think I am in a hurry to see the forth episode just yet. I am glad it has not been released yet on DVD and is still being played overseas on TV as instead of the normal ten episodes the next series has twenty which will be huge. Hopefully by the time it does reach our shores my passion will be relit and I will be dying to see what happens to everyone.

The outstanding Tenth Doctor, David Tennant, bids farewell to his pinstripe suit and trainers in this thrilling two part special. It is also the last Doctor Who story written by Russell T. Davies who has been one of the key driving forces, as Lead Writer and Executive Producer, behind the Doctor Who revival which began with Series 1 in 2005. His tenure in these roles wrapped with this two-part special.