All Creatures Great and Small - The Complete Series 6 review 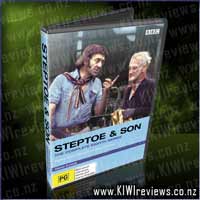 The eighth series of Steptoe and Son would be its last, the 1974 Christmas special that followed it becoming the 57th and final episode. The series that had changed the face of British comedy remained as hilarious and poignant to the end including such memorable moments as Harold discovering just what the butler saw; Albert eating pickled onions in the bath and the fabulous waterbed affair.

Back in Fashion:
When the Steptoe yard is chosen as the background for a fashion photoshoot, beautiful models fill the house. could this be Harold's lucky day?

And So To Bed:
Harold's success with women hits rock bottom when the willing Marcia discovers bugs in his bed. There's only one solution, he's off to Bayswater Bederama...

The Seven Steptoerai:
When local villain Frankie Barrow tries to extort protection money from the Steptoes, Albert gets assistance from the over-65 Kung Fu club.

Upstairs, Downstairs, Upstairs, Downstairs:
Albert is upstairs. Flat on his back. Despite his son taking care of him - on doctor's orders - his slipped disc is healing very slowly. Then Harold notices the mysterious disappearance of all the pink liquorice allsorts...

Seance In A Wet Rag And Bone Yard:
Albert has met a spiritualist and his weekly chats with Henry VIII and Ghandi brings Harold's scepticism to the fore. But can the medium conjure up Harold's mum?

Guess How Much I Love You: Forever and a Day
Rating: 10.0

Dammit - I missed out reviewing the first 3 series and from series 5 to 7! If you are a fan of British comedy, as indeed I am, you will appreciate the frustration of missing a good thing.

And Steptoe and Son are a good thing - a very fine thing!

I remember the Steptoe series (certainly the repeats) were one of the few shows I was allowed to stay up and watch as a young chap, and this has never been forgotten. Hot chocolate in one hand, trying not to spill it, and laughing hard at the antics of Harold and Albert. My dad sat next to me laughing loudly too (mum was at work at the time - I'm not sure she would have let me stay up!)

My daughter, now 11, has joined me in watching Steptoe and enjoying it as much as I did at her age. I'm sure the pure comedy and timelessness of the writing will enthrall a new generation (as it has now done for four generations of Clan Diogenes) as easily as it captivated the audience back in 1974.

Absolutely a classic and a welcome addition in the library of connoisseurs of English comedy!

Score: 10.0
Product reviews for listing 2314: Earth - The Power of the Planet -  Type of Show: Documentary Series

This landmark five-part series uses specialist imaging and compelling narrative to tell the life story of our planet, how it works, and what makes it so special. Examining some of the great forces that shape the Earth - volcanoes, the ocean, the atmosphere and ice - this DVD explores their central roles in our planet's story revealing how these forces affect the Earth's landscape, its climate and its history.