Home > Categories > Entertainment > Stageshows > Back to the 80's review

ProdID: 787 - Back to the 80's
Performed by Abbey Musical Theatre 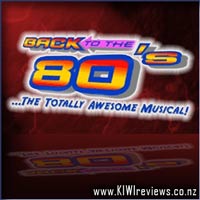 Disclosure StatementFULL DISCLOSURE: A number of units of this product have, at some time, been supplied to KIWIreviews by the company for the purposes of unbiased, independent reviews. No fee was accepted by KIWIreviews or the reviewers themselves - these are genuine, unpaid consumer reviews.
Available:
24th Nov to 17th Dec 2005

Back to the 80's product reviews

Abbey Musical Theatre is about to take you back in time. Remember when actors became American presidents; hair was BIG; fluorescent socks matched your ear rings, your belt and your bangles; shoulder pads were essential; Pac Mac ruled and floppy disks were-..well, floppy?

Take yourself Back to the 80's - the Totally Awesome Musical. Set in the USA, Back to the 80's relives the highs and lows of the senior class of William Ocean High School. Cleverly penned by Aussie writer Neil Gooding and directed by Scott Andrew, it captures the fun and insecurities of a love struck teenager while embracing many familiar aspects of the decade we were all sucked into and spat out screaming "Did I wear that?".

The musical is a non-stop rollercoaster of laughs and is jam-packed with hit songs we've all recited in front of the mirror (using our favourite hairbrush!) including Material Girl, Walking on Sunshine, Man in the Mirror, Kids in America, Footloose, 500 Miles, Total Eclipse of the Heart and Love Shack.

So squeeze into your stone wash denim, pull out those shoulder pads, powder on lots of pink blush (and start practicing your moonwalk!) as you take a totally awesome trip Back to the 80's.

With a live 80's band, musical direction by Liz O'Connor, choreography by Leanne Melbye, a Star Wars dream sequence, a Delorian, and even a Live Aid Concert; who could afford to miss the experience?!! So grab your styliest 80's gear and get your friends together for a great night's entertainment and party - 80's style!!!

Beauty and the Beast
Rating: 6.9

How I Met Your Mother: Season One
Rating: 6.5

This was my first time inside the Abbey Threatre itself, and I was quite surprised by the interior... tables and chairs lined up in an irregular pattern, obviously well suited for dining, and yet still allowing a surprisingly good view of the stage... this is NOTHING like a 'normal' stageshow theatre, such as The Regent on Broadway for example.

I was honoured to be invited to see the final dress rehersal, and I was forewarned that this is when they would be smoothing out any last hiccups and technical glitches, so I was prepared to endure a rough show... so I was quite surprised to find myself laughing, claping and cheering along with the rest of the audience, despite a few noticable 'technical issues being smoothed out in organised panic' by the various technical teams.

Now at this point I need to stress, this is NOT a big-budget Broadway production, it is a small-budget production performed by mostly amateur cast. So if you are expecting smooth perfection, forget it... this show is not like that. It's about taking you back a few decades, and the storyline revolves around the highschool lives of a group of 'seniors' aged between 16-18. Having been around that age myself during the 80's, I found the antics of the characters all too culturally accurate. The tongue-in-cheek humour that popped up throughout was brilliant, and executed well by the cast, and the songs really tied in well with the storyline, and often added to the situations occuring at the time.

There were some very talented singers and performers in the cast, of particular note were "Fergal McFarrin" who does "Class Geek" so well I was almost convinced... he even DANCED geek-style!

, and "Ilene", who has a wonderful voice with a lot of power, and with some more training could have a great career ahead of her.

Overall, this was a fun show, with the audience really getting into the spirit of it, and there were a lot of somewhat nervous giggles as various costumes appeared on stage, particularly during the "Live Aid Concert". There was a lot of laughing, clapping and even a bit of singing along with the songs 'from our youth'... it was also good to see the younger members of the audience, who would have been but babes in arms as the 80's became the 90's, joining in and having fun. Well worth the effort to go see, so long as you don't go expecting perfection.