The Art of District 9 review 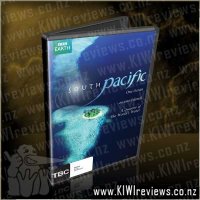 What do you know about the South Pacific? The words South Pacific conjure up images of blue water, swaying palm trees and idyllic beaches but, as this series reveals, that is only part of the story.
South Pacific is the ultimate portrait of life in the world's largest ocean. Over six 50 minute episodes, this landmark series explores the isolation of its islands, the extraordinary journeys wildlife and humans have taken to reach these remote specks of land and what happened to both after their arrival.

Travel to places few people have heard of and witness the power of undersea volcanoes as they attempt to form new islands, tiger sharks snatching newly fledged albatross chicks and bizarre human rituals that involve jumping from 20 metre wooden scaffolds with only forest vines to break their falls.

Living in splendid isolation has created a strange and constantly surprising world inhabited by flesh eating caterpillars, giant crabs capable of opening coconuts, vampire bugs with antifreeze in their veins and many other unique animals like kakapos, kagus and monkey tailed skinks. All found nowhere else on earth.

The BBC are renown throughout the globe for their natural history series and this series is no exception to the rule.

Previously all narratorship was under the distinctive husky tones of David Attenborough and many pf the programs were shot with him very much at the helm and not just as the narrator. Attenborough's shoes are big shoes for anyone to fill and although Benedict Cumberbatch did an admirable job of narration, I couldn't help missing Attenborough soft, quiet voice which many to be considered to be full of soft-spoken authority.

The filmography, is absolutely stunning and the lengths the film makers go to get the right shots cannot be underestimated (as they show you are the end of each program). Technically they advance with their filming year on year, but also always push the boundaries in filming. Sometimes the unease this produces (such as seeing tuna caught in nets, bleeding and in their death throws) is uncomfortable at best - and this unease highlight the human problems in the pacific (as elsewhere in the world); other shots were just awe inspiring. Visually, the BBC and the producers of South Pacific leave you wanting for nothing. Usually the 'making of' part is on a separate part of the DVD, but with this one, the highlight of the 'making of' were at the end of each episode. This is not what many would expect, but I felt it added another dimension to the program and broke up the technical details of how each shot was achieved into manageable chunks that I believe will make a generation of kids want to be wild-life photographers!

The human interaction on the shows was kept to a minimum (unlike the shows of old where a presenter would be in the frame) and this was best shown in the 'making of' where you see just how many people were involved with each shot and how unobtrusive they were to catch the whole story.

There was kind of a logical sequence to the episodes, but I found this a little disjointed at times. At times the show was about the islands, or the people, or the flora & fauna in a happy jumble within each episode. However not being able to see the episode list on the DVD box (no DVD box with the review copy) I was left a little bewildered. Looking up the series on the internet revealed the producers reasoning and thinking as to way the show was laid-out; so hopefully, dear reader, you will not be as confused as I was.

Overall, this is a series that can be watch over and over again. With out new flatscreen TV, the high definition was apparent (having just migrated from a small CRT TV to LED) and just added to the overall experience. I can't wait to see what the BBC has planned next.

Banshee is an American drama television series created by Jonathan Tropper and David Schickler for Cinemax.

The series takes place in the fictional small town of Banshee, Pennsylvania. After serving 15 years in prison for stealing diamonds from Ukrainian gangster Rabbit (Ben Cross), the unnamed protagonist (Antony Starr) travels to Banshee to find his heist accomplice and former lover, Anastasia (Ivana Miličević). When he finds ... more...