« The Leftovers: Season One review 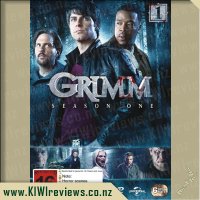 The classic Grimms fairytales come to life like never before in this dark and imaginative (Mike Ayers, CNN.com Entertainment) supernatural series from the producers of Buffy the Vampire Slayer and Angel.

Portland homicide detective Nick Burkhardt (David Giuntoli) discovers hes descended from an elite line of criminal profilers known as Grimms, who are charged with keeping balance between humanity and the creatures of myth. With newly awoken abilities to detect the evil lurking among us, Nick struggles to keep his old life separate and safe as he becomes ever more entrenched in the ancient rivalries of the Grimm world.

I have always enjoyed things which take a well known story or myths, legends, fairy tales etc and gives them an interesting twist as does Grimm.

The Grimm starts off with putting a twist on "Little Red Riding Hood" but throws in a police detective who learns that he can see the hidden beasts of our world like werewolves. He now has to try and balance his normal police life and home life whilst learning his new role as a Grimm who's job is to hunt down and dispose of the bad beasts and creatures of the world. He pairs up with a local werewolf who helps him learn about the creatures he must now face.

I really liked the twist on the various tales (not all are based upon the Grimm brothers collection of tales) and puts not only a slightly more modern take on it but also puts an investigative and criminal aspect to it which is something that I really enjoyed. Whilst I don't recall seeing any of the actors in this in other shows, they all did a great job and I can find nothing to complain about in that regards. I really enjoyed season one and can't wait to see season two.

When Prince William married Kate Middleton on April 29, 2011, millions of people watched the couple take their vows in Westminster Abbey. Nineteen months later when the couple announced that they were expecting their first child - a child that will one day take the throne of the United Kingdom and Commonwealth realms - the news made headlines around the world. In this insightful documentary, we mark the birth of the great-grand child of Queen ... more...