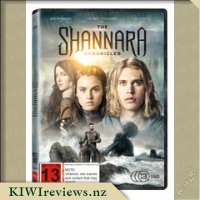 Thousands of years into Earth's future, the civilized world is no more, wiped out by a holocaust of its own making. Divided into what is known as the Four Lands, it is now a world of beauty, heroes and magic, presided over by a single family known as Shannara.

Over the centuries, descendants of the Shannara bloodline have been called upon to fight and reshape the Four Lands and the lives of its inhabitants, a mix of races including Elves, Dwarves, Trolls, Gnomes and Humans.

But decades of peace are about to be threatened and a powerful new saga is about to begin. This is the story of the heroic journey to vanquish an impending dark and terrible force. I had seen this show advertised on SKY TVs Sci-Fi channel 'The Zone', and the mention of being filmed in New Zealand combined with the casting of Manu Bennett (known most notably from 'Spartacus', and 'Arrow') made this a series that I was quite excited to watch.

I'm excited to have more fantasy genre entertainment being filmed in New Zealand. Such films as the 'Lord of the Rings' and 'The Hobbit' sagas exposed the world to a higher standard and expectation for visual environments that just can't be properly recreated in the studio. So it is great to see a television series try to live up to these precedents and actively improve the visual landscapes. The Shannara Chronicles are set in what appears to be a fictional land, but a post-apocalyptic, post-human civilisation world. A world where humans still exist, but are now a minority, and no longer the dominant species. A world full of not only humans, but elves, trolls, gnomes, and demons.

The first season of the Shannara Chronicles is based on the second book in the original trilogy; 'The Elfstones of Shannara'. In some ways it is quite evident that the story does not begin from the start, as there is a lot of mention towards previous meetings, and battles. This has both good and bad points. On the negative side, it seems that we have missed a lot of action and exciting storyline, as well as certain actions occurring between characters that really leave you confused (despite constantly referring to previous unseen events to explain) as to the relevance to the story (perhaps it was closing off a story arc from the first book? Who knows...). On the positive side however, despite having to constantly remind the audience about the events that they haven't seen but are integral to the understanding of the plot, a lot of the backstory is provided in a flowing manner that - unless you are actually trying to be critical - is easy to understand and doesn't feel too forced (Also it keeps the option open for a great prequel season in the future.

The scripting does leave a bit to be desired, with many characters coming off one dimensional and predictable. The looks of the cast are amazing. I still remain hesitant at Manu Bennett's Allanon, who looks more unkempt and frugal, than powerful and magic infused, but the rest of the cast are rather breathtaking. Poppy Drayton and Ivana Baquero (who play Amberle and Eretria respectively) make a beautiful duo that proves that an attractive cast can help you overlook plot holes and inaccuracies in the story. Austin Butler (who plays Wil Ohmsford) provides some eye candy for the women too, though it is easy to see that this story was written by a male.

The plot starts off at a rather accelerated rate in the first episode, jumping straight into it, but the story does rapidly slow down, and suffers from a lot of diversions and subplots that have no real effect on the overall plot beyond providing some additional tension. It's almost as if they realised at the end how little the plot had progressed, and it became a mad dash to complete the story before the season came to a close. This was rather unfortunate as it built up for a great boss battle that ultimately didn't have the expected attention or focus.

But for a darkish storyline, they have done well to keep the environments bright and colourful, adding to the feel of a fantasy landscape. It would have been nice to have the colour schemes change over time to signify the lapses in time and the state of emergency, but it still worked well as it was a lot easier on the eyes. What wasn't so easy on the eyes, was some of the CGI and special effects... the less said about that, the better.

But overall, I thoroughly enjoyed the series. There is a lot of backstory that still needs to be revealed, there are current story arcs that remain unfinished, and while the scripting left a lot to be desired, you could certainly see room for improvement. I can't wait for season 2.

The Magical Garden is a birthday party and holiday Programme venue with a difference!! Located in a unique tranquil country setting minutes from Hillcrest/Tamahere and Hamilton City. Our large indoor venue is situated on two and half acres and surrounded by wide open spaces, bush lands and wonderful Magical Gardens.