Cruel To Be Young review 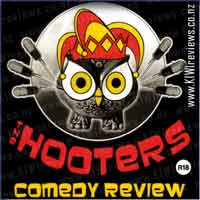 Disclosure StatementFULL DISCLOSURE: A number of units of this product have, at some time, been supplied to KIWIreviews by the company for the purposes of unbiased, independent reviews. No fee was accepted by KIWIreviews or the reviewers themselves - these are genuine, unpaid consumer reviews.
Available:
See website for tour dates

There's a non-stop side-splitting comedy line up in the 4th Hooters Comedy Review.

Lovers of live comedy will appreciate another hilarious evening of entertainment. R18 event.

My friend and I arrived at the Regent at 8.45pm ready for a great night. We purchased a glass of wine and headed to out seats...then waited in darkness for a good 20 minutes for the show to start.
Mikey Havoc came out and said a few words. He got little response from the crowd so went on to introduce the first act, Benjamin Crellin. He managed to keep a smile on my face the whole time he was on stage. He had some really good material that had me in stiches. He knew how to keep the crowds attention and did it well.

Dai Henwood was up next - I was looking forward to seeing him, from the three he was the only one I had heard of. His body language, stage performance and good looks had me hooked - amazing stuff. Much to my disapointment, his act lasted a little over half an hour. I heard later he was over the road at a pub shortly after he finished on stage - I'm sure Palmy's nightlife could have waited the extra half hour, after all, we did expect a three hour show.

Mickey D was up next and failed to keep my attention, the disapointment of Dai's short act and Mickey's lack of 'funny' material had me waiting for the end. I could tell people around me were also getting bored as conversations were getting louder.

Overall I did have a good time - the tickets are cheap enough and if you get a good line up then it's really worth going. Hopefully next time we will get our full three hours of comedy.

I have always been interested in the Hooters Comedy Reviews but never actually managed to get along to see one. This time was different! As my friend and I found our seats at the magnificent Regent Theatre and got comfortable, we waited for the laughs to come.

A little bit of a late start - it was 9.15pm by the time very excited and energetic Mikey Havoc entered the stage and introduced himself as MC for the night. He was entertaining all through, and did a great job of introducing each of the three acts.

First up for the evening was Ben Crellin. He is known as one of New Zealand's top globally toured stand up comedians, so I had good expectations of his act. He started out with some cracks at students, and about Massey, which were great as they were relevant to Palmy. His jokes were quite 'safe' at the beginning, and got more and more raunchy as his act went on. He had the audience really laughing! He was a great act, and perfect for the first of the night.

Intermission time, a quick 15 minute break and it was back into it. Next up was Wellingtonian Dai Henwood. He is a familiar face on music channel C4, with his own show 'Roll the Dai' which sees him let loose on a road trip around NZ, getting up to all sorts of hilariously funny antics along the way. Dai's travel strategy is to write six destinations, suggested by email or the people he talks to along the way, on a blow-up die, then give it a roll to determine where he's headed. (Get it -'roll the dai'?).
Anyhow enough about his TV show. Live on stage, he was just awesome! Beer in hand, he had the audience eating out of the palm of his hand. He was big on audience interaction, which was great - he would ask questions and get the audience involved. He had a lot of energy and moved around the stage a lot, keeping us engaged.

At one point Dai asked: 'Who here likes McDonalds'? To which one lady in the audience responded by cussing at Dai - for what reason, I have no idea. Dai simply walked over to her, and asked her why she thought that of him. She didn't have an answer. To which the audience cheered and clapped at. Very amusing! At the end of his act, Dai performed a hilarious dance to 'When Doves Cry' by Prince. The audience absolutely loved this guy. He was my favourite act of the night.

Another quick and much needed break, and time for our final act of the night - Aussie born and bred Mickey D. I have heard him described as "Adelaide's favourite son of stand-up", so I had good expectations for his act. He turned out to be a likeable, cheeky kind of fella, who makes you feel like he's in your lounge, cracking open the next round of beers as he breaks out the jokes. Maybe it was because he was the last act, but I didn't find Mickey D as funny as the other two comedians. The audience seemed to feel the same, as there weren't nearly as many laughs. He still kept us all entertained however. I think it would be difficult to be the last act, no matter how funny you are, as the audience attention tends to wane at such a late time.

My advice if you are going to attend one of these events, is to leave your 'PC hat' at the door. It's R18 for a reason!

A thoroughly enjoyable night out. We left in great spirits and with laughter induced tummy ache as we strolled away into the lights and sounds of the Palmy nightlife. If you need a laugh, I would definitely recommend the next Hooters Comedy review.

Professor Brian Cox takes a giant leap for humankind as images of distant alien worlds are brought into breathtaking focus. Giant ice fountains rising over 100km high; an ocean hidden beneath a frozen crust of ice; storms three times the size of Earth coloured blood red by a vortex of dust and gases; immense volcanoes that would put Mount Everest in the shade - this amazing DVD reveals the true and awesome beauty of our solar system. It's an ... more...