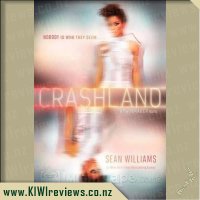 "I am the real Clair Hill and I am telling you the truth. We saved the world from Improvement, but that was only the beginning."

Clair and Jesse have barely been reunited when the earth is plunged into its biggest crisis since the Water Wars. The d-mat network is broken. People are trapped, injured, dying. It's the end of the world as Clair knows it - and it's partly her fault. "The girl who killed d-mat" is enlisted to track down the rogue AI known as Q, who is now missing.

Q is the key to fixing the system, but she isn't responding to any calls for help, and anyway, can she be trusted? Caught between pro and anti d-mat philosophies, on the brink of all-out war, Clair must decide where she stands - and who she stands with - at the end.

In a world totally integrated with, and by, D-Mat - the technology where energy and matter are interchangeable - the only thing to fear is the collapse of D-Mat. And that is exactly what Clair made happen in the first book, Jump.

Now Clair is faced with an ongoing race to stay ahead of those who would take their revenge on her. In this mad dash to survive and try to repair the world she helped break, her only allies were classed as public enemies and outcasts only days earlier, while her enemies are legion, never-ending, and impossible to stop. They also seem to have technology that beggers the mind and breaks every ethical and legal rule in the world in which this series is set.

When the most basic aspects of your life are torn away from you, what do you do? This is not just a fictional story, it's a clarion call for the world we are in now. The internet is so pervasive, and for some it is the closest thing they have to an actual 'life' - living vicariously by proxy through chats, messages boards and online gaming forums. We rely on it for communication, education and resource supply - so the question we should be looking at is "would you cope without it, if it shut down on you right now?"

I grew up in an era when looking up information meant going to a library, searching through a few thousand index cards until I found the Dewey number for the book I wanted, then hunting the shelves to find the book. Even then, I still had to read the book to learn the information. No 'google' to summarise and present an excerpt for me, no tight little bite-sized nugget of knowledge, easy to digest. While explaining this to my teenage son, it became clear to me that he had no idea how to find out information without immediate access to the internet through his laptop, phone or tablet. This has prompted a new 'tradition' in our family of weekly library visits, and a return to a home-based educational library for us.

Today's fiction is often tomorrow's fact. History has proven this so clearly it puzzles me why so many people don't see it. I plan to be ready when 'the big crash' happens, as I am utterly certain it will one day. It may be because of a global war, it could be a solar storm, asteroid impact, terrorist action, or just a sheer inability of the infrastructure to keep up with the exponentially-growing data load we are placing upon the global datanets. Because of the clear parallels between the world we live in and Clair's world, this story really resonated with me. I loved how it could easily be read by kids as a great story with lots of action, tension, thrills and spills... or it could be equally appreciated by adults as an allegory of our data-centric global society in the so-called first-world nations. Such a story is a rare gem indeed, and I would not be in the least bit surprised to see this story arch forming the basis of a new movie series in the not-too-distant future.

Overall, this is a great story, perfectly aimed at the teen and young-adult demographics. There is action, tension, intrigue and a touch of young love. The ending will seem a little strange at first, but it's a very unusual way to tie up loose ends while also allowing the story to continue. I must say, it will be very interesting to see how the third book is going to go.

Alfie thought he knew his destiny. He didn't know the half of it. Fourteen-year-old heir to the throne, Alfie, didn't expect to be King so soon. He DEFINITELY did not expect to be DEFENDER OF THE REALM. A legendary superhero, fighting a secret, centuries-long battle to protect the nation from monsters and super-villains. An ordinary girl, Hayley Hicks, finds herself fighting alongside Alfie in a desperate struggle to stop a fearsome new enemy, the Black Dragon.