The Bridei Chronicles #3 - The Well Of Shades review 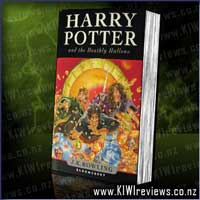 Harry has been burdened with a dark, dangerous and seemingly impossible task: that of locating and destroying Voldemort's remaining Horcuxes. Never has Harry felt so alone, or faced a future so full of shadows. But Harry must somehow find within himself the strength to complete the task he has been given. He must leave the warmth, safety and companionship of The Burrow and follow without fear or hesitation the inexorable path laid out for him...

In this final, seventh instalment of the Harry Potter series, J.K. Rowling unveils in spectacular fashion the answers to the many questions that have been so eagerly awaited.

My First Board Book: Things That Go
Rating: 10.0

The final installment in the Harry Potter series: Harry Potter and the Deathly Hallows. So this is the one where we will finally learn Harry Potters fate, will he finally be rid of 'he who shall not be named' or will he lose the battle and join his parents for eternity.

The Harry Potter series of books is a work of art, and I am still super impressed by J.K Rowling. I wonder if anything else she produces will ever compare to these though. In the Deathly Hollows, Rowling, successfully ties up any loose ends from the previous books. As the books spanned over 10 years (from the release of the first book in 1997 to deathly hollows in 2007), Rowling learned exactly what her fans wanted and as such she delivers a book that answers every Potheads questions and concerns.

Deathly Hollows revisits many places and characters from the first six books, Rowling even manages to reference some of the dialogue from these earlier books too. In this final book J.K Rowling offers a well written eagerly anticipated final farewell to 'the boy who lived'. I really enjoyed reading the series, each page as gripping as the one before it, and it did not matter that I had already watched the movies lol

I found this book to be really great, but at the same time a bit too fast. Just as it benefited from being cut into two movies, it would have benefited in being cut into two books. It really was great how we got answers for all the questions that had cropped up throughout the books. But I felt that too much time was given to Dumbledore, and not enough into how everyone coped with the deaths. We were never told how many students or teachers died in the final epic battle, nor how our main characters coped with the amount of loss in such a short time.

I did love that we had the small view into their future, and that Harry named his son after both Dumbledore and Snape.

All in all a great book, just could have done with a bit more emotion in regards to the deaths at the end of the book.

I have always been a huge fan of Harry Potter and so, of course, I was eager to read this final installment the day it came out - somehow I managed to bribe my way to the top of the family reading list.

The first thing I noticed was that this book read somewhat differently to the previous installments. There was a particularly big contrast between this and the Half Blood Prince, primarily in the way that the Deathly Hallows had a much faster pace and was full of action, leaving little time for reflection or quite so much attention to detail. Not really a bad thing, just different. It was quite a roller-coaster really.

I did like the way that J. K. Rowling pulled all the pieces together and answered most (if not all) of the questions and mysteries that she had so carefully set up over the previous installments. I even liked the poetic justice dished out in the final battle. I got to the end and felt... almost... satisfied.

But there was something still nagging and it took me quite a few conversations to figure out what. Almost as though the final chapters were rushed. Most of the deaths in this story were given appropriate space to be understood and accepted, but the final death - of such a well loved character - was not really properly laid to rest. There was no funeral, no epilogue of the aftermath, the beginning of rebuilding lives so suddenly shattered. I guess I just couldn't accept the epilogue we were given because I simply didn't care what happened ten years later, I wanted something closer to home... a sense of hope rekindled.

Ah well, I suppose I could just write the epilogue I wanted in a fanfic and post it online somewhere - but that's not quite the same is it?

Still, Harry Potter is, and always will be, one of the defining books of my childhood. I am definitely better for having read it.

Having been a major Harry Potter fan since first reading the very first of the books, Harry Potter and the Philosopher's Stone, I'd been eagerly awaiting Harry Potter and the Deathly Hallows since I reached the final word on the last page of Half Blood Prince. Finally I had my copy in my hands, and I quickly slipped off to a quiet corner to start reading, fully looking forward to immersing myself in this latest, and last book of J.K. Rowling's. For some reason, I wasn't able to lose myself in it as easily as I had done with the previous books, and was rather surprised by the fact that each time I put the book down, I actually had to push myself to pick it back up and read some more. That was definitely a first when it comes to the great Harry Potter!!! Was I simply Pottered out, or was it that the book just wasn't as good as the earlier ones?? I think it was a bit of a mixture. There were quite a few sections in the book where it seemed to drag on a bit, being a tad on the long-winded side of things, and it wasn't until the final quarter of the book where I really got hooked into it. But I will admit that during this last part of the book, I could NOT put it down at all!!
It is still well worth a read, and of course an absolute must for those avid Harry Potter fans, it just wasn't my favourite of the series.
Be prepared to say goodbye to a few old friends throughout the book... maybe having a box of tissues nearby could be handy!! There are several twists and turns as well, that could end up surprising a few people, and many questions that may have been created from the previous books will be well and truely answered in this final chapter of Harry's life amongst the pages penned by the talented J.K. Rowling. Do Harry, Ron, and Hermione all make it to the final page?? Now that would be telling!!
Overall... a good book, but I'm glad the Harry Potter saga is finally over.

When the animals visit Little Sam Sundae's ice cream shop on Jellybean Street they have some unusual requests. Sam whips up a blue cheese sundae for Mouse and a worm cornet for Hen. Finally, it's Gorilla's turn to order but all he wants is plain old vanilla. Licking their lips, the other animals realise that Gorilla has made the best choice, after all. Luckily for them, gorillas love sharing!