ProdID: 7062 - Alice Through the Looking Glass
Directed by James Bobin 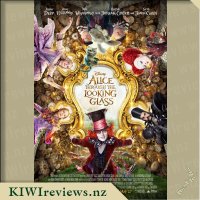 Price:
TBC
Available:
In cinemas from May 26th

Alice returns to the whimsical world of Wonderland and travels back in time to save the Mad Hatter.

I have seen and loved Alice in Wonderland, it was everything quirky and abstract that I expected from that universe and Tim Burton, so when I heard that the sequel was being made I was thrilled and couldn't wait to see this, and added to the excitement was my son who loves Alice and wanted to see more she could get up to in the world of Wonderland. This film takes place approximately three years after the first film and see Alice facing trials not just in Wonderland but in the world she really lives in with her mother and her own future as a woman who refuses to be shut up.

The visual effects are stunning, I love the scenery, how everything was brought to life and the scenes with the clock were wonderful. There were a couple of moments that had the kids jumping but they all still enjoyed it enough to be asking to watch it again and again. We had just started watching this when my mum came in for half an hour of FarmVille exchange and she ended up staying for the entire film and thoroughly enjoying it. The movie itself has a good lesson running through it, you cannot change the past, but you might learn something from, and learn from it Alice does.

I know that this did worse in the box office than it predecessor did but I remain ever optimistic that a third instalment would find its way onto our screens, though it won't quite be the same without Alan Rickman there as Absolom. The family loved this film, I love the strong Alice with zero love interests and no need for a man. This will get plenty of reruns here.

This movie has been slammed by critics and a lot of speculation has been pointed at Johnny Depp and the assumption that it is due to his personal life. Although, I personally belive it is because people just don't like the extreme quirkiness. It is extremely Tim Burton and it is over done and is weird and yet beautiful at the same time.

The special effects are incredible and the scenery is, at times, breathtaking and really well done - you can not fault it. The characters are as expected extremely weird and over the top but the make up is fantastic. I do not remember the first segment of the Alice franchise either it was just not good or it is not memorable but either way I can't recall anything and for the life of me I don't remember why Alice and the Madhatter are so close but in this case I just went with it. I tried not to over think anything and instead just became immersed in the movie and let it carry me away. I have never read the books so I had no idea what to expect.

I took my seven year old daughter and it was a little darker than I was expecting but she handled it well besides jumping a couple of times. She did admit that the Madhatter scared her a little bit especially when his eyes became darker. I don't think I would take any younger children than this, however in saying that the cinema had smaller children than her and besides a couple of occasions where I heard people talk and the audience get restless it was deadly quiet which was great. You do just get carried away by it all.

I really enjoyed the Cheshire Cat and wish he was more a central character instead it is Alice and time and trying to change the past which of course can not be done, you can only learn from the mistakes and try and change them by your actions in the present. It is not a complicated story and is easy to follow. Casting can not be faulted and the story is not bad and where as I enjoyed it I am not sure I will remember it in a couple of months time.

I quite enjoyed watching Tim Burton's version of Alice in Wonderland so I was very excited and curious to see what Alice Through The Looking Glass was like. I know there is a book written by Lewis Carroll called Alice Through the Looking Glass but from everything I've read about it this movie does not follow that plot at all so forget the book if you've read it or you will be bitterly disappointed.

If you haven't watched Tim Burton's Alice in Wonderland, I'm going to have to stop you here, this movie will make no sense at all if you haven't seen the first one so go find that movie first and then come back here.

To start with, the Director, Tim Burton, was side-benched for James Bobin in this sequel, possibly because of the rather negative reviews the first movie got from the media, although I'm not sure why the reviews were so negative considering it grossed an impressive sum of $1bn. Either way, I'm pretty sure the media is going to be just as harsh this time around.

The CGI work is good and costumes look amazing but the same characters that were critiqued badly the first time around return exactly the same but, in saying that, being a sequel they didn't really have the opportunity to change much. The saving grace of this movie is the new character, Time, played by Sacha Baron Cohen. He's not my favourite actor but in this movie he is funny and witty and nothing like any other character I've seen him play before, a welcome change.

The movie starts off with an action packed scene showing Alice following in her father's footsteps but given the almost impossible situation you could easily think that Alice is dreaming or something. The real world action for Alice doesn't last long and she eventually finds her way through a mirror and into Wonderland where she meets up with all her old friends and finds out that the Mad Hatter is ill and it is only her who can save him by travelling back in time and finding out what happened to his family.

Many time puns later and one pearler piece of advice "you can't change the past, you can only fix the present." and the movie is over leaving you with a lot of answers about some of the main characters that you may have never wanted to know. I'm pretty sure Lewis Carroll wrote Alice in Wonderland (and Through the Looking Glass) to be a nonsensical story so I'm not entirely sure why the writers have decided to try to make sense of everything.

Overall, once I got past the fact that it shouldn't make sense, I really did enjoy watching this movie. Since I hadn't read the book I had no idea what to expect and I certainly didn't expect what happened.

I'll leave you with the immortal words from Lewis Carroll: "Everything's got a moral, if only you can find it."

What happens when your nation is being swallowed by the sea? With the harsh realities of climate change looming, the low-lying Pacific nation Kiribati (pop: 100,000) must find a solution to ensure the survival of its people.