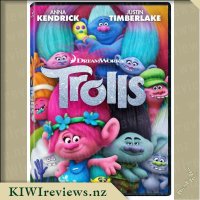 Disclosure StatementFULL DISCLOSURE: A number of units of this product have, at some time, been supplied to KIWIreviews by the company for the purposes of unbiased, independent reviews. No fee was accepted by KIWIreviews or the reviewers themselves - these are genuine, unpaid consumer reviews.
Available:
on DVD from April 2017

After the Bergens invade Troll Village, Poppy, the happiest Troll ever born, and the curmudgeonly Branch set off on a journey to rescue her friends. I am the right age to be able to remember Trolls from when I was a child. In fact, I had quite the collection. Trolls with all different coloured hair, big ones, little ones, I even remember creating some "Trolls pencils" using some rainbow coloured fluffy material and gluing it around the end of a pencil. I was quite excited to be sent a copy of the DVD to review through KIWIreviews. It wasn't until my husband and I were settling in for the night and getting ready to watch the DVD that I started to question as to why the Trolls were popular when I was a child. Was there a movie, or a story or were they just toys? After a little look on Google I decided they were just toys that had made themselves quite popular. Which then lead me to wonder just what the movie could be about and I started to have a few doubts as to whether it would be something we would enjoy.

Before thinking too much about it we decided just to watch it. The first thing I noticed is that the Trolls had undergone quite a makeover from what I remember them being. I'm pretty sure most of my Troll toys were naked, with jewels in their bellies and their hair sticking straight up with no extra embellishments. The characters in the movie were quite appealing though, and I could imagine that children would love them. Princess Poppy was the stand out - such a happy go lucky kind of character and I think she was cast perfectly. Anna Kendrick provided the perfect voice for Poppy, and as an added bonus she can sing amazingly well which fitted the movie.

Dreamworks have this amazing ability to create children's movies that include adult humour that helps to keep the attention of those adults who watch these movies with their children. Thankfully they have done a fantastic job of it in this movie too. My husband and I shared a few laughs while watching the Trolls on their journey to save their friends from the Bergens.

While the story was fantastic, and the humour great, my favourite part of this movie would be the soundtrack. What an amazing collection of songs, both old and new. When we got to the end of the movie the first thing I said to my husband is that there wasn't a song that I didn't either sing or bop along to, if not both! From Cindy Lauper's True Colours through to the hit song by Justin Timberlake, Can't Stop The Feeling, there is a little something for everyone. And who would have known that the Trolls would do a fantastic rendition of The Sound Of Silence. This is certainly a soundtrack I am interested in purchasing.

I remember the Trolls craze of my childhood and never did I think it could be turned into a movie, so when I heard about this film coming out I had some serious doubts. Turns out though, that the film industry is getting pretty good at taking something minor and making it into a blockbuster film, even if more of never thought it was needed. My kids, as with pretty much every trailer they see, were immediately requesting that we watch this, and (yay for cheap movies at my local) we did.

We get a quick history lesson and then the film takes place 20 years later, with the trolls throwing a huge party, which of course attracts a nearby Bergen. Cue the peppy princess Poppy and the bad-tempered Branch joking up to go and save her friends. Nothing in the film surprised me nor was any moment unexpected and I went in expecting not to enjoy it (typically the peppy characters are too peppy), but surprisingly enough Poppy did not irritate me, she was the perfect level of peppy without stepping over the line into irritation.

One of Poppy's things is to scrapbook and I like how this was incorporated into the movie, and the pages we get to see really did look like felt. The creatures created, that Poppy and Branch meet on their travels, were both odd and neat at the same time. As always, there are plenty of jokes for the kids, mine loved the naked glitter guys, and joke that will fly over the kids head but the parents will get (one joke, when they first meet a cloud, had all the adults in the theatre laughing).

I came away from this having enjoyed it far more than expected and of course between me with "Can't Stop the Feeling" stuck in my head and the kids having loved the film, I can see us whatching this again.

Score: 8.7
Product reviews for listing 5675: Guardians of the Galaxy -  Directed by James Gunn

After stealing a mysterious orb, American pilot/outlaw hero Peter Quill is hunted down and thrown into an inter-galactic prison. In order to secure his freedom, Quill reluctantly joins forces with alien bandits Drax, Gamora, Rocket and Groot to form an alliance of misfits known as the Guardians of the Galaxy, and with the all-powerful villain Ronan hunting the orb, the fate of the universe is in their hands.