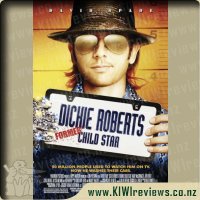 When given the chance to act in the film of a life-time a former child star finds himself renting a family in an attempt to give himself the childhood that he never had.

When I first watched this I thought it would be a bit of silly fun, instead, I really really enjoyed it, especially the point of view as life as a former child star trying to get back in the game.

Dickie Roberts was pushed into acting at a young age by his mother and ended up the poster child of a much loved TV sitcom, however when the show finished he found it hard to get more work. Skip forward twenty or so years and he is a car valet, self absorbed and desperate to act again. The perfect role falls in to his lap but he must relive his childhood first and so rents a family.

I really had fun watching this movie, from seeing former child stars from TV shows that I used to watch ('Saved by the Bell', 'The Brady Bunch' to name a couple) and then the fun way in which they can happily poke fun at themselves and their youth... Not to mention some of the plain old fun reminiscing scenes with the two children in the house he moves into.

This movie is one to watch into the end credits as they have a fun song "Former child stars" at the end featuring some TV mums and former child stars from shows like "Happy Days" and so on, it's so much fun but an even better version (simply because it is longer) is in the special features, and is well worth the watch for the extra fun, it's just not a good song for kids. "You want an autograph, well I'ma tell you this, please don't ask a brother, while he's taking a piss."

This is a fun movie, may seem quite silly but it is so much fun.

Solace tells the story of a veteran FBI detective (Morgan) and his younger ambitious partner (Cornish) who enlist the help of the reclusive, retired civilian analyst, Dr. Clancy (Hopkins) to help solve a series of bizarre murders.

When Clancy's exceptional intuitive powers, which come in the form of vivid and disturbing visions, put him on the trail of the killer (Farrell), the doctor soon realizes his gift of second sight is little match against the extraordinary powers of this elusive murderer on a mission.