The Journey: How I Cheated Death And Cured My Diabetes In 21 Days review 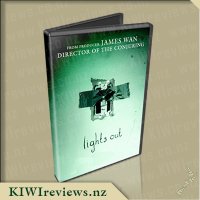 Disclosure StatementFULL DISCLOSURE: A number of units of this product have, at some time, been supplied to KIWIreviews by the company for the purposes of unbiased, independent reviews. No fee was accepted by KIWIreviews or the reviewers themselves - these are genuine, unpaid consumer reviews.
Available:
November 2016

Growing up, Rebecca never knew what lay behind the terror lurking in the dark. When she left home, she thought she'd also left her fears behind. Now her little brother, Martin, is experiencing the same unexplained and terrifying events that once tested her sanity.

A supernatural entity with a connection to their mother's past is haunting them, and as Rebecca gets closer to discovering the truth, her life and the lives of those around her are in danger ... once the lights go out.

To be effective, a horror movie has to make you react with a frisson of terror even when you are familiar with the genre and more or less know what is going to be emerging from behind the curtain or under the bed. In this respect, this is a film that certainly had me on the edge of my seat more than once. In the tradition of all good thrillers, it combined eerie sound effects and effective lighting (or lack of it!) to set the mood for the supernatural element to pop up at frequent intervals.

I thought the different personalities were nicely balanced. Bret (Alexander DiPersia), the long-suffering boyfriend, is effective in adding a "normal" perspective to the story as the other main characters are all noteworthy for their relationship to the supernatural and/or psychotic. Martin (Gabriel Bateman), Rebecca's little brother, is sensitively presented as a child who has lost confidence in the adults around him while still feeling a sense of duty towards them. I found his performance especially convincing; his relationship with his older sister is realistically depicted, not glossed over as some Hollywood movies are apt to do. Rebecca (Teresa Palmer) is the older sister who reluctantly returns to her mother's house in order to help her brother.

All children enjoy fairy tales, and if we admit it, we have to acknowledge that many of these fairy stories are pretty violent. Jack climbs up a magic beanstalk, carries out a home invasion, and kills the occupant when he awakens and discovers Jack looting his home. Hansel and Gretel survive being murdered by a witch but then turn round and kill her instead. But children grow up and then it is no longer PC to admit to liking fairy tales (unless they are being read to a new generation of children, of course). So there will always be a place for the well-crafted horror movie - the natural successor to the childhood fairy tale. Fantasy rules, and an effective horror movie will emphasise this element for the adult viewer. In this respect, "Lights Out" offers a rewarding escape from the real world and an eventful journey into the world of the supernatural.

This is certainly a film that will be welcomed by followers of horror movies, but those who are not into this genre may find it shallow and/or farfetched. Personally, I thought it rather ambitious to take elements of a psychological thriller dealing with mental illness and then add the supernatural to the mix. What did not quite work for me was the idea that a supernatural entity linked to one character could spill over into the physical world and impact on other characters when the assumption was that this entity was born of mental illness and could exist only through its host (Rebecca's mother, played by Maria Bello).

So - I would recommend that when you go to see it you set aside any preconceptions about mixing genres and the appropriateness of including melodrama in a movie about a serious topic like mental illness, and just go along for the ride. It is an enjoyable foray into the world of a rather shadowy, only partially visible creature whose sole aim is to attack and kill the innocent humans who cross its path. In this respect the film is a worthy successor to the early movies that came out of studios such as Hammer and Universal. Just don't go to watch it on your own and then find you have to walk home in the dark!