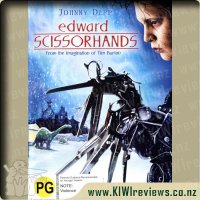 High above the town in a lonely, gothic mansion, lived a man called Edward Scissorhands. His hands were cold but his heart was warm. You see Edward Scissorhands wasn't a real man - he was a creation. And his life forever changed the town where he lived.

The creator who invented Edward, gave him everything. A heart. A brain. Even a covering of skin. But the inventor died before finishing poor Edward, leaving him with shears of metal where his fingers should have been. Edward lived alone where he could hurt no one and no one could hurt him.

Until the day the Avon Lady came calling...

This was an incredibly touching film. The idea of a man creating an artificial human, slowly replacing robotic pieces, with human like appendages. The man suffered a heart attack before he was able to attach Edward's final pieces, leaving him with some pretty awful scissorhands.

This is pretty similar to a frankenstein plot, with the movie following someone finding Edward and trying to bring him into the community. The people of the neighbourhood were either accepting of him, or hated him. Tempers are soon soon at their peak as Edward's lack of hands creates trouble, as his only defence is offence.

I enjoyed watching the ways in which the family attempted to reintegrate him, by using his scissor hands as a positive, instead of a negative. This effectively provides Edward with a creative outlet, for his emotions.

Little special effects are used in this film, and little are necessarily needed. It relies completely on character interactions and plot, and doesn't worry about action or CGI.

The movie ends in a rather extreme fashion, that will leave the viewer saddened. It took me years to be able to see the full movie, due to the odd times that it would get scheduled on television, but I'm glad that I finally managed to watch the whole movie. It had me hooked.

From the day I first saw this, Edward Scissorhands cemented a place in my heart and made me fall in love with both Johnny Depp and Tim Burton movies.

Edward has never had contact with anyone after this creator, and unfortunately, before Edward could be given real hands his 'father' died. Then one day the local Avon lady finds Edward and brings him into her home where she lives with her husband and teenage daughter. Edward begins to have a lovely life until things go haywire.

This is such a lovely movie, kind of Frankenstein in effect, since he was created not born, but shows what isolation has done but also being given the chance to live a 'normal' life. The learning curve involved for both Edward and the family he lives with is well done, especially his love interest who learns that beauty isn't just skin deep. This really is such a timeless and quirky movie and I just can't wait till my kids are old enough.

Johnny Depp is, of course, brilliant as Edward, and everyone else does a superb job too, love all the nosy, gossiping neighbours and how they are all wonderfully scripted. The makeup for Edward is flawless and really well done, and I LOVE the set design for his home at the end of the street, foreboding and yet so mysterious at the same time.

I really do love this movie, my only question... Where the heck does he gets all that ice from?

An epic of miniature proportions!

Journey inside the miniature world of bugs for larger-than-life fun and adventure under every leaf! Crawling with imaginative characters, hilarious laughs and colorful, lifelike computer animation, Disney and Pixar's A Bug's Life is terrific entertainment for all ages. On behalf of "oppressed bugs everywhere," an inventive ant named Flik hires "warrior bugs" to defend his colony from a horde ... more...